Climbers ready to rock and roll in local competitions this fall 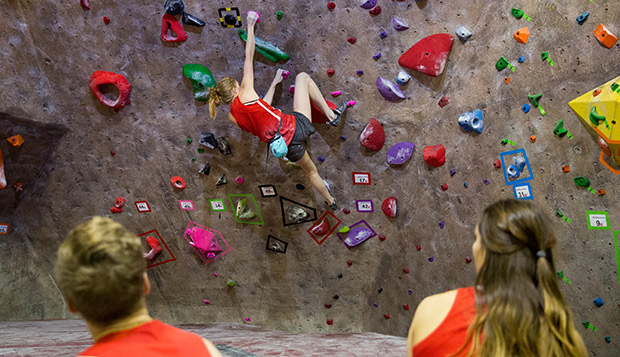 Liberty junior Tori Perkins climbs in a home competition at Rise Up in downtown Lynchburg. (Photo by Andrew Snyder)

Practices started this week for Liberty University's rock climbing team, which will open its fall competition in the Capital Division of the Collegiate Climbing Series on Oct. 13 at Crimper's Climbing Gym in Blacksburg, Va.

"We traveled with seven men and seven women last year," Gaunt said. "We decided to make it more competitive within the team, and to scale down on our travel by doing more local competitions to help us save money for bigger comps and to send more team members to nationals."

"Last year, we qualified almost our entire team, but we only took Tori to nationals," Gaunt said. "This year, with the event set for April 27-28 in Murphysboro, Tenn., we would love to take the full travel team."

While the rest of the schedule will not be finalized until Oct. 1, Gaunt said the team will compete at River Rock Climbing in Roanoke on Nov. 2.

Gaunt looks for senior Keegan Nichols to lead the men's team and to be pushed by juniors Jonathan Anderson and Connor Ellis and senior Landon Brower.

Besides Perkins, who placed fourth in her division at the Deep Water soloing competition held Aug. 25 in Montreal, Canada, the Lady Flames feature sophomore Steph Wilson, a sophomore from Surrey, England, and Ruth Jang, a senior from Indonesia.

"We have some good athletes that will do really, really well," Gaunt said, noting that Kylie Tidmore and Abigail Daniels are the only two freshmen on either team. "They have a lot of learning to do, so it will be nice to have experienced climbers like Tori and Steph on the team to train under."

Several team members traveled to West Virginia over the weekend to volunteer at the New River Gorge Craggin' Classic. Liberty Assistant Coach Corey Messer, who heads up the Virginia chapter of Solid Rock Climbers For Christ, led the trip. The team served a pancake breakfast, participated in clinics and workshops, and enjoyed fellowship with climbers from around the country at the SRCFC's national conference.