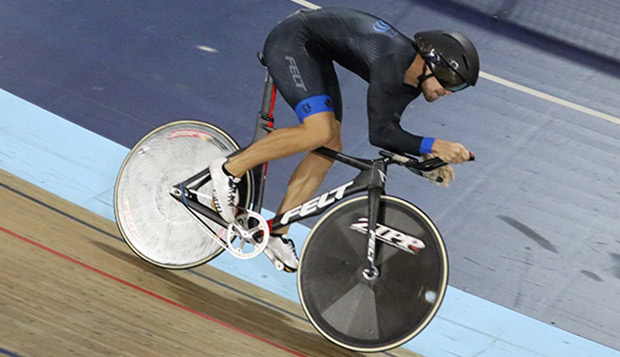 Budarz won the 35-44 master’s division of the 2017 USA Cycling National Championships on a velodrome track in Pennsylvania.

When he was hired as an astronomy and physics professor at Liberty University this summer, Dr. Timo Budarz didn't know Club Sports had an opening for head coach of its men's and women's cycling teams.

"It was providence," said Budarz, who officially took over the reins of the third-year program on Aug. 15. "I was at the right place at the right time and met the right people."

After arriving from California, where he taught for 13 years at Santa Ana College, Budarz visited Bikes Unlimited in downtown Lynchburg, where Assistant Coach Van Phillips serves as head mechanic. He talked to the general manager, John Seinar, who relayed the professor's passion for cycling to Club Sports Senior Associate Athletic Director Jeff Boettger.

"He had been praying about being involved in the program somehow and is really excited about it, and we are excited to have him on board," Boettger said.

Budarz will head up the third-year cycling teams while also helping to train Liberty's men's and women's triathlon teams until a new head coach is named this fall.

Budarz was born in Chicago and grew up in Germany, where he explored the scenic terrain on his BMX and road bikes. After moving back to America, Budarz emerged as one of the nation's fastest sprinters as a cyclist at Purdue University, where he studied from 1997-2004, earning his PhD in theoretical biophysics.

He placed second in the match sprint at the USA Cycling Collegiate National Championships before going on to train with the Canadian National Team and compete at elite levels. He could have qualified for the U.S. National Team before a bout with Lyme's Disease sidetracked his Olympic dreams.

"God was showing me, ‘Yeah, you have the potential to be the best, but that's not what I want you to do," Budarz said. "He did not want me to use the gifts I've been given just for my individual glory.'"

Now 44, Budarz has remained active in the sport, winning the 35-44 master's division of the 2017 USA Cycling National Championships in Rock Hill, S.C., and the elite two-man division of the California state time trial in June. That competitive track record will translate well to his first coaching position.

"Looking back now, all of the obsessions I have for sports science … will pay off in a big way here at Liberty," said Budarz, who served as a mentor to a cycling club in California, developing fitness training programs for its members. "I have a scientific mind for training, a diverse background and racing history, the desire to see my athletes succeed, and the right tools to see it happen."

"One of his greatest attributes is he is a gentleman who, if he has a question and wants to find something out, does the research himself," Boettger added. "He will add another level of technology to it, navigate the growth of all of the athletes, and strive to train them in a way that helps them progress."

Budarz will advise his athletes on nutritional and dietary strategies that have benefited him throughout his career. His training regimen will include using new computerized trainers soon to be set up in the team's cycling studio at Candlers Mountain Station.

"It is going to be a high-tech studio with customized workouts and real-time displays up on the wall so they can see and I can see what they're doing," Budarz said. "That's a really good tool for maintaining a very carefully prescribed workout intensity. Mentally and physically, it's a matter of how hard are they willing to push themselves."

Budarz led an unofficial team ride along River Road in Amherst County on Saturday and held a team meeting for returning and incoming cyclists on Monday, after teaching his first day of classes. They are gearing up to compete in the Atlantic Collegiate Cycling Conference and at USA Cycling Collegiate Nationals in the spring road course season.

"We have a very diverse set of athletes, ranging from a reigning world champion (triathlete Giovanni Bianco of Italy) down to others who have never before competed in the sport," he said. "If we can take the talent we have and make it stronger — not necessarily win, but get to a point where we're competitive — that will draw more cyclists to Liberty and strengthen our program."