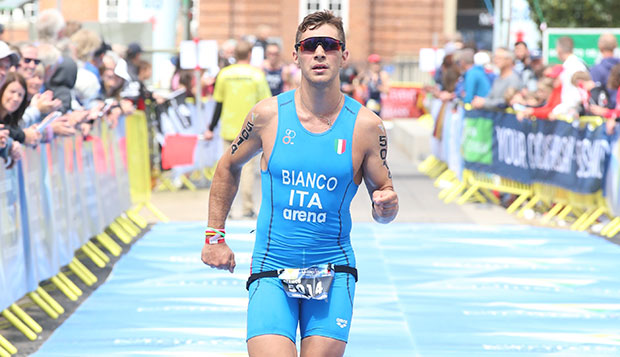 Giovanni Bianco crosses the finish line after completing a 30-kilometer run, the final phase of the July 14 long-course triathlon World Championships in Denmark.

"Winning this race was one of the most beautiful blessings of my life, probably best race in my career," Bianco said. "I will always remember it."

The 22-year-old from Italy, where he was the 2017 sprint triathlon and sprint duathlon age group national champion, finished 12th out of 354 competitors overall. Complete results are available online.

In early May, at the North American Pro Championships in St. George, Utah, Bianco qualified for but opted not to travel to this weekend's Ironman 70.3-mile World Championships in South Africa. Bianco's first Ironman 70.3-mile race was a tremendous success as he placed second in his 18-24 age division and fifth overall out of more than 2,500 amateur competitors in 4:19:09.

"My triathlon performance improved so much with (former Flames head coach) Parker Spencer as my coach last semester, which was amazing," said Bianco, who transferred in as a senior last spring. "I loved his training and schedules."

Spencer moved to Tempe, Ariz., to head up USA Triathlon's Project Podium earlier this month so Bianco will be working with new cycling Head Coach Timo Budarz, who is also serving as head coach of the triathlon team on an interim basis.

Bianco and several triathlon teammates will travel to Williamsburg next weekend to race in the Patriots Triathlon Festival, their first competition of the fall season that culminates with the Oct. 20 Mid-Atlantic Collegiate Triathlon Championships hosted by Liberty at Smith Mountain Lake.