Shrode on board as Liberty's new Western equestrian coach 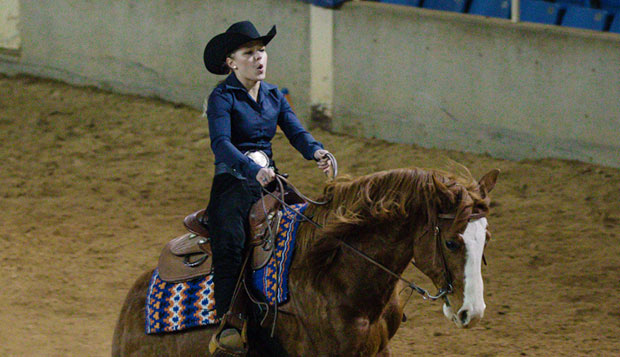 Madeline Shrode competed in Western equestrian this past spring at the University of Tennessee at Martin.

"It's real quick and kind of unexpected," said Shrode, who served as the Skyhawks' team captain. "It's very exciting and it's going to be very fun. I am looking forward to hitting the ground running, learning all of the IHSA rules and helping the riders in and out of the arena."

Shrode arrived in Lynchburg last week with her husband, Carson, who will pursue his master's degree through Liberty's Rawlings School of Divinity.

"We took a tour and fell in love with the campus," she said. "It's one of the best seminaries in the country. God had a plan for us and it was crazy how He had every step worked out."

Suzanne Flaig, who serves as executive director of the Liberty Equestrian Center and head coach of both the Hunt Seat and Western teams, said Shrode is highly qualified for her first collegiate coaching job.

"She has a good demeanor with people, and she's very passionate about collegiate riding," Flaig said. "She is very skillful with the horses, having competed at a varsity level in the NCEA, and has a good balance between horsemanship and reining, the two events offered in Western."

Shrode replaces Lauren Eagles, who returned to Missouri this summer after starting the Western team in 2015 and serving the past three seasons in that role. In early May, Eagles guided sophomore Erin Mays to become the Lady Flames' first Western rider to qualify for the IHSA national championships in Harrisburg, Pa.

Shrode hopes to complement Flaig and build on the successful foundation established by Eagles.

"I am very blessed to have Suzanne (Flaig) and (Hunt Seat Assistant Coach Kimberly Counts) and (Barn Manager) John (Eubank) as my co-workers," she said. "They have been so welcoming and wonderful. Coach Flaig has done an amazing job developing the program and taking it to where it is now and I am excited to learn from her. Lauren Eagles did a tremendous job of getting a first qualifier to (IHSA) nationals this past spring. That's a huge accomplishment and I hope I can continue that forward movement and get the team better and better."

Whereas the Hunt Seat team has a roster of around 23 riders, the Western team only keeps 10-12 that Shrode will help select during open tryouts in late August.

Shrode will also be involved in directing the Western riding competition of the Virginia Commonwealth Games, hosted by Liberty, with shows at the Equestrian Center held over Main Games Weekend on July 28-29.