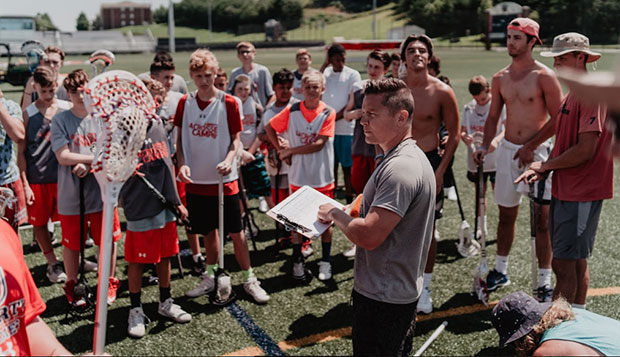 The 65 participants in this week's overnight Liberty Lacrosse Summer Camp have found respite from the heat radiating off the Liberty Lacrosse Fields by taking advantage of Liberty University's myriad indoor Recreation Centers, including the LaHaye Recreation and Fitness Center's aquatics center, basketball courts, and rock wall.

"We've been bringing them all around campus, utilizing all of the facilities Liberty has and they're all loving it," said Chris Mickel, a rising senior defensive midfielder for the Flames' men's lacrosse team who is in his first summer serving as a camp counselor. "They're all having a blast, and I'm having a blast with them, getting to know them."

"Every year it's pretty brutal, intense heat, so we are keeping the kids hydrated," Flames Head Coach Kyle McQuillan said.

The camp will conclude Friday with scrimmages between campers and counselors, as well as skills competitions and giveaways.

"It's great to have some guys come back and give some time and energy back to the program," McQuillan said, noting they bring a diverse skillset to the table. "We've got a lot of campers at different positions, about 12 kids at faceoff and four different goalies, so this is a great camp because they can get individual position work and time with guys who know what they're talking about."

Campers have come from throughout Virginia as well as parts of North Carolina, West Virginia, Maryland, and as far away as Minnesota.

"It's neat to be able to start seeing kids coming from a lot of different places to experience Liberty," McQuillan said.

One of those is John Plummer, a rising senior at Queen Anne's County High School in Chestertown on Maryland's Eastern Shore who plans to walk onto Liberty's team as a close defender when he enrolls in the fall of 2019. He will follow in the path of his parents, Frank and Robin, who both graduated from Liberty, and his older sister, Leah, a rising senior sprinter on the Lady Flames' track & field team and sports medicine major.

"We're starting to get to the point where alumni from years past, guys who played for the team back in the '70s and '80s, their kids are looking at playing here now," McQuillan said.

The Flames didn't have a lacrosse team when Frank Plummer turned down a chance to play for the University of North Carolina and enrolled at Liberty on a marching band scholarship, but he instilled a passion for the sport in John and taught him the fundamentals of the game.

"My mom wouldn't let me play football, so this was my second choice, but I have learned to love lacrosse and now it's my favorite sport," John Plummer said, noting that Maryland is a hotbed for lacrosse. "We live, eat, and breathe lacrosse. It's crazy."

He is even more passionate about his faith.

"I like the Christian atmosphere at Liberty," Plummer said. "I play to help my team win, but in the end, I'm just playing to glorify God and to portray the Christian faith and morals in the way I play."