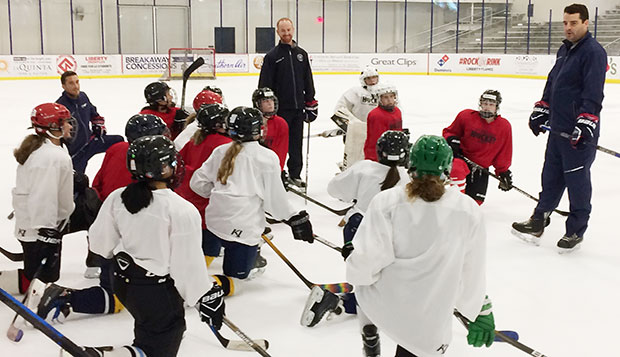 Interest in women's hockey is heating up this summer at the LaHaye Ice Center, with nearly 40 players participating in two age divisions of the Liberty Christian Hockey School's girls resident day camp.

"It's exciting to see the numbers growing in the girls game," said Liberty ACHA Division I women's hockey Head Coach Chris Lowes, who led the Lady Flames to their second national championship in four years in his first season at the helm. "We like having people on our campus and making use of our facilities. It's been a great week."

He said the camp has started to expand its geographical reach in attracting players from as far away as Texas.

"We've got a great group," Lowes said. "We're starting to reach into the Carolinas and we've got quite a few players from Hampton Roads, Northern Virginia, and Maryland, giving them a chance to play year-round."

Coaching staff focused on skill development through on-ice game-situation drills and scrimmages before counselors led campers in a variety of off-ice activities that showcased Liberty's Recreation Centers and encouraged fellowship and spiritual growth.

"They've been swimming and hiking and playing indoor soccer and going to chapel," Lowes said, noting that Club Sports Director of Sports Medicine Angie Witt led morning devotions and players attended a Wednesday night worship service. "Our counselors invest in these girls, who come from all walks of life. Some of them are familiar with what Liberty's mission is and some of them aren't, but it's a big part of our camp."

Carlson, who formerly served on staff at Hockey Ministries International (HMI) camps in Alaska, Boston, Chicago, and Pittsburgh, loves sharing her passion for her two favorite things in life — hockey and God.

"It's a great camp and fun to be a part of it," she said. "Camp is draining, but it's so rewarding. I've heard nothing but positive things from the campers. There's a perfect balance between being focused and improving as a player but also having fun and enjoying themselves. They have a lot of opportunities to ask questions and to grow in their faith."

While this week's girls camp has room for growth in future summers, the three boys camps at Liberty have sold out, including the July 8-12 and July 15-19 youth and middle/high school overnight sessions, respectively, that Lowes and Carlson will also help instruct.

"Those will be big groups with 80 or 90 signed up for the third week and then 120 for the last, which is more of a pre-college prep camp," Lowes said. "It's exciting."