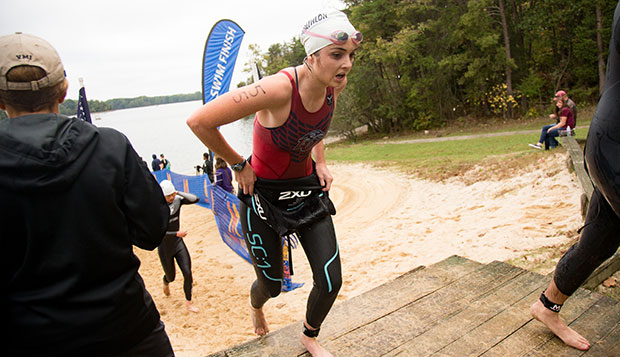 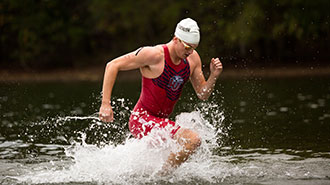 The NCAA race, capped at 75 participants from the 30-plus NCAA Division I women's programs across the United States, will start at 8 a.m. It will be a draft-legal, sprint-distance event with a 750-meter swim followed by a 20-kilometer cycling stage and 5K run. All three phases start and end at the same location near the park's beach access.

"This is the first time a club triathlon program has hosted an NCAA race, which will bring more recognition to our program," Liberty triathlon Head Coach Parker Spencer said.

The NCAA race is the regional qualifier for the Nov. 4 Women's Collegiate National Championships in Tempe, Ariz. (In November 2016, former Lady Flames triathlete Megan Merryman competed as part of a select group of women's collegiate club qualifiers in the NCAA Division I National Championships in New Orleans, finishing sixth overall out of approximately 75 triathletes.)

The Liberty Triathlon Festival also includes the Mid-Atlantic Regional Championship draft-legal sprint race to follow at 9:15 a.m. and the Olympic-distance, non-draft-legal race set for 10:30 a.m., in which the Flames and Lady Flames will contend for individual and team titles in the strongest region in the United States. It will conclude with the final of 50 events of the inaugural Kinetic Multisports race series (formerly the Virginia-Maryland Triathlon Series), open to triathletes from Virginia, West Virginia, Maryland, Washington, D.C., Pennsylvania, Delaware, and New Jersey.

Spencer expects Liberty's triathlon program to make more than $7,000 from the NCAA race-entry fees alone, not counting the estimated 30-40 participants in the Mid-Atlantic Regional draft-legal sprint, 300-500 in the Mid-Atlantic Olympic-distance race, and upwards of 200 Kinetic Multisports competitors. The NCAA race is projected to have a regional economic impact of $125,000.