Schedule heats up over summer for Flames' elite triathletes 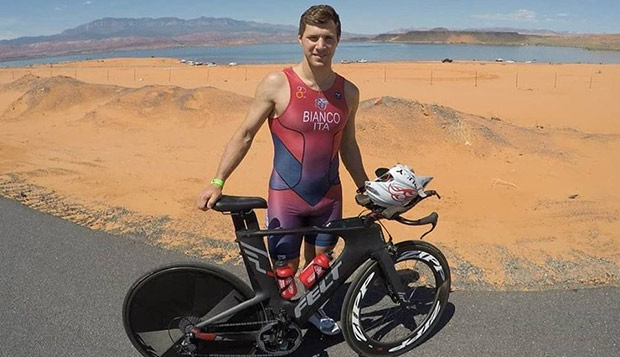 Giovanni Bianco qualified for the Sept. 1-2 Half Ironman 70.3 World Championships in South Africa by placing second in his age division May 5 in Utah.

"This was his first time racing that distance outside of Italy and St. George was an incredible experience for him," Spencer said. "It's known as one of the toughest Half Ironmans in the world with the elevation gain throughout the race."

Now, Bianco can apply for his USA Triathlon elite card that will enable him to compete professionally in Ironman and Half Ironman events around the world.

Spencer also had one of the best race experiences of his career, finishing in 4:34:01, just 30 seconds behind his fastest Half Ironman time, set on a much flatter course. He placed eighth among amateurs in his 25-29 age division after completing the swim in 34:46, the cycling stage in 2:29:50, and the run in 1:24:43, qualifying for a world championship triathlon for the eighth year in a row.

On May 6, sophomore Thomas Sonnery-Cottet from France placed 29th in the ITU CAMTRI American Cup in Richmond, which serves as the U23 National Championships.

It was just the start of an action-packed offseason full of travel opportunities for Spencer and his American and international triathletes.

Sonnery-Cottet will compete in the French U23 National Championships, a draft-legal sprint on May 27, before traveling to three U23 European Cup races — in Ukraine on June 2, Belgium on June 23, and The Netherlands on June 30, with Flames freshman Javier Lluch Perez also representing Spain in the last two. Based on his performances, Sonnery-Cottet may also be eligible to compete in an ITU race in Hungary in early July.

"Thomas has a really rigorous but exciting schedule to stay on track to make the French National Team for the 2024 Summer Olympics," Spencer said.

Lluch Perez will compete in the ITU Duathlon World Championships in Denmark on July 7, when rising senior Freddie Shashaty will race for the United States. Then on July 14, Bianco, Spencer and Liberty Assistant Coach Beni Thompson, a former professional triathlete from Chile, will compete in the 18-24, 25-29 and 45-49 age divisions, respectively, of the Half Ironman distance (70.3 miles) ITU Long Course World Championships in Denmark.

From July 15-31, Spencer, Thompson, Bianco, Shashaty, Lluch Perez, and Sonnery-Cottet will participate in an elite camp in Font Romeu, France, a premiere altitude training base near Sonnery-Cottet's hometown, before returning to Liberty in early August.

In late August, Spencer will welcome his returning triathletes and new recruits, including Matt Galbraith from Richmond, Csabi Majoros from Hungary, and two from Texas — Christian Brashner and Jonathan McAlister, who is competing in the 16-19 age group of the Gold Coast World Championships in Australia this summer.

Finally, in early September, Spencer and Bianco will travel to Nelson Mandela Bay, South Africa, for the Half Ironman World Championships before training picks up for the Fall semester schedule capped by the Oct. 20 Mid-Atlantic Collegiate Regional Championships at Smith Mountain Lake.