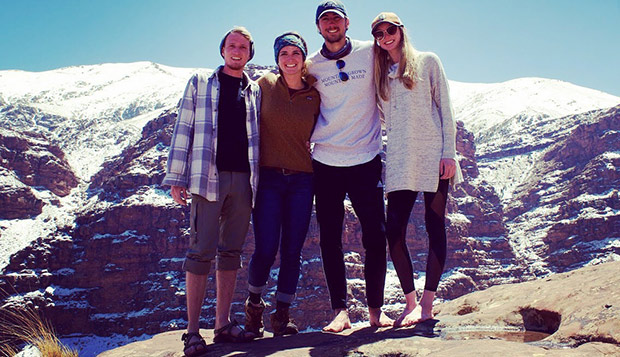 Liberty University's rock climbing team manager Corey Messer traveled with three members of the second-year program to Morocco in northwest Africa last month to get a new perspective on the sport — and the world — while participating in an April 14-15 bouldering festival in the High Atlas Mountains.

"Every day our expectations were blown out of the water," Messer said. "We stayed at a ski resort at 9,000 feet elevation and every day I would wake up and encounter a moment where I'd say, ‘I never knew the world looked so good,' either by the people we met or the physical views we encountered. We were just floored every day."

He was joined by freshman Tori Perkins, who placed second in the sport division at the USA Climbing Collegiate Nationals near Houston the weekend after returning from Morocco, senior Laina Marble, and sophomore Luke Ligas.

While serving as team captain as a junior, Messer traveled to Nepal over Christmas Break and did some hiking in the Himalayas, but he was even more impressed with the climbing opportunities in Morocco.

"There were climbers from Australia, Europe, and all throughout Africa," Messer said. "I would be super happy to go back there with a group of eight American climbers to support friends hosting the bouldering festival next April or May. The vision is to make it a yearly trip, and tailor it to the rock climbing team."

Messer, who is graduating this month with a Bachelor of Science in Industrial and Systems Engineering, currently works part-time for Belvac Manufacturing in Lynchburg, Va. He is looking for a full-time engineering position, but plans to assist Liberty rock climbing Head Coach Elliot Gaunt in some capacity next fall.

This past fall, Messer started the first Virginia chapter of Solid Rock Climbing for Christ (SRCFC) after meeting with Calvin Landrus, the director of the ministry based in Bend, Ore. He encouraged a good friend from his home state of West Virginia to start a chapter in Morgantown, W.Va., and there are now 26 chapters throughout the United States with eight more international chapters in Europe, Canada, and Cuba.

The Lynchburg, Va., chapter of SRCFC, which includes several members of Liberty's rock climbing team, meets on the first and third Friday nights of each month at either the LaHaye Recreation & Fitness Center rock wall or at Rise Up climbing gym in Downtown Lynchburg for a time of Bible study, event planning, and growing the Christian rock climbing community.

"Our team is great at being very close and being able to compete and put skills to the test at a high level in the collegiate realm," Gaunt said. "It is great to have an outlet for the ministry side of the sport, to have a direct connection with Corey to get involved in spiritual outreach and impacting the community for Christ."

Messer, who is also a skier and served on staff at Liberty Mountain Snowflex Center last school year, has worked with Liberty ski and snowboard Head Coach Isaac Gibson, director of the Lynchburg chapter of Skiers & Snowboarders For Christ (SFC).

Messer is planning to take members of the local chapter of SRCFC and meet up with the West Virginia chapter to lead climbing and camping trips to the New River Gorge in West Virginia this summer, with the next trip set for May 25-28. For the first time this fall, Liberty's rock climbing team will serve at the Solid Rock national conference at the New River Gorge, attracting many chapter representatives and other climbers from around the country for clinics, fellowship, and development of the fast-growing sport.

"We would love for those who enjoy rock climbing and share the same passion and vision we do, that every climber and community should hear about the love of Jesus, to join Solid Rock," Messer said.