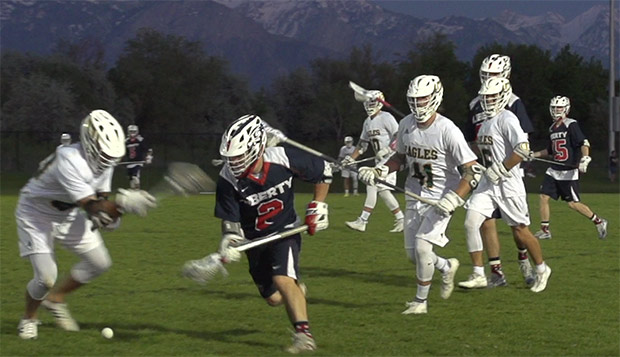 Liberty (9-5, seeded ninth) showed it was overdue for its first-ever DI nationals appearance, upending the No. 8-seeded, defending MCLA DII national champion Eagles (12-3), whose only two previous losses came against No. 1 Chapman.

"(Assistant Coaches) Mike Zumpano and Brett Bernardo did a fantastic job of scouting and prepping our guys," Flames Head Coach Kyle McQuillan said. "They didn't do anything we weren't prepared for and our guys responded very, very well."

Liberty junior defender Win McKeever deflected the Eagles' first shot and junior Brayden Harriman, a surprise starter in goal, made the first of his 11 saves, setting the tone for the Flames' defense from the start.

"We've got two terrific goalies," McQuillan said of Harriman and sophomore Ryan Reynolds, Liberty's regular starter. "It was a gut move. Everybody has that mentality of next man up and he played and proved he belonged in the pipes."

Sophomore midfielder Carter Elliott responded with the Flames' first score at the 12:15 mark of the first quarter after making an aggressive run into the right side of the box, but aggravated a hamstring injury on the play and was sidelined for much of the game.

Harriman came up with another clutch save and sophomore attack Derrick Esh (three goals) capitalized by finishing an entry pass from junior attack Sam Gregory (two goals, four assists) in the left crease despite an unsportsmanlike check after the shot for a 2-0 advantage.

Moments after having a running shot from the right side carom off the post, Flames junior midfielder Chase Wright (three goals) received a pass behind the cage and ducked out into the left crease before beating Eagles goalie Tyler Schweikert, stretching Liberty's lead to 3-1.

Concordia answered two minutes later on a sharp-angled submarine shot from near the left endline by Jonah Rinaldi into the upper netting. Then, at the 3:00 mark, the Eagles capitalized on a counterattack with Connor Reed setting up Sean Goodell for the tying shot from the left side. After a timeout, Aho lifted Concordia to its first lead, before Logan Perry pushed it to 5-3 just over a minute before halftime.

McKeever battled for a ground ball pickup on the opening faceoff of the second half and Gregory fought his way through traffic moments later to pull the Flames back within 5-4.

Harriman picked off an Eagles pass from behind the cage before Gregory picked up a ground ball off another turnover and sent a pass to sophomore attack Caleb Britton for a top-shelf finish from the left side, tying the contest at 5-5 with 11:51 left in the third quarter.

Aho put the Eagles back on top 6-5 with a low underhand shot from the left side at the 10-minute mark before Harriman scooped up a loose ball in the goal mouth and Esh controlled a ground ball at midfield. He sent a pass to Britton on the left side who sent a pass to Gregory and then received a return feed, finishing with a bounce shot past Schweikert, knotting the score at 6-6. A minute later, the Flames seized a 7-6 lead on another play set up by Gregory, who dumped a pass into Wright for a turnaround score in the left crease, prompting Concordia to call timeout with just under 4:00 left in the third.

A minute later, Britton worked off a screen behind the net and found Esh cutting into the left crease for a left-handed shot over Schweikert's left shoulder to make it 8-6.

With Liberty in a man-up situation, Wright netted his third goal on an overhand shot with 1:00 left in the quarter, giving the Flames all the momentum they would need going into the fourth quarter.

Liberty maintained possession for much of the start of the final stanza and Gregory sneaked a tough turnaround shot over a defender for a four-goal advantage with just under 9:00 remaining in regulation. Five scoreless minutes later, Esh extended Liberty's lead to 11-6 with an explosive run down into the left crease for a point-blank putaway, all but sealing the win.

The Flames will take on top-seeded, undefeated, 2016 champion Chapman (12-0) — a 12-6 first-round winner over Indiana — in Tuesday's 4 p.m. (MST) quarterfinal contest, webcast live on the MCLA.us site. 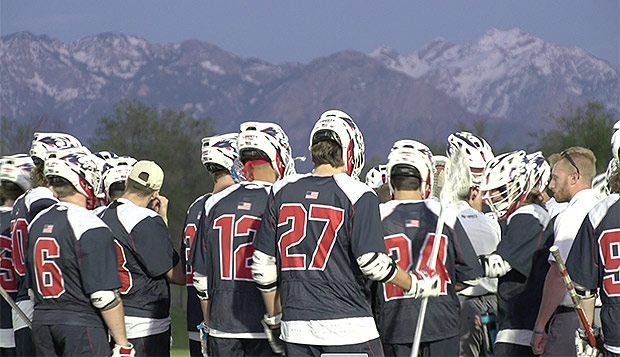