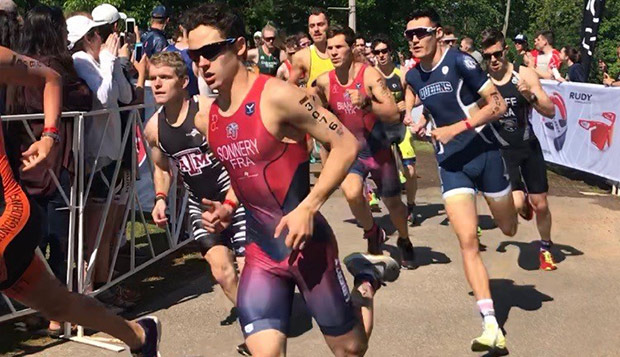 Combined with the Lady Flames' 21st-place total with 1,464 points, Liberty finished 12th overall out of 106 scoring colleges and universities with 3,579 points.

"Without a doubt, it was our best showing," Flames Head Coach Parker Spencer said, noting that Liberty improved on last year's eighth-place finish in the men's standings and 13th in the combined. " All in all, I am really proud of my team."

Due to high water levels and dangerous currents on the Black Warrior River, the races did not feature swimming stages, but were instead duathlons with two running phases before and after a cycling stage.

The Olympic-distance race started with a 2.5-kilometer run, proceeded to a 40K cycling route, and finished with a 5.2K run.

Sonnery-Cottet, who placed sixth behind freshman teammate Giovanni Bianco's fifth-place finish in Friday's Draft-Legal Sprint (2.5K run, 20K bike, 2.5K run), opened Saturday's Olympic-Distance race with a time of 7 minutes, 47 seconds in the 2.5K leg before clocking a time of 58:54 on the 40K cycling stage and a 17:50 on the 5.2K run.

Sonnery-Cottet also led Liberty to a 12th-place finish in the mixed team relay that followed the Olympic-Distance race.

"Not having the swim really hurt us because he is very strong in the swim," Spencer said. "But (Sonnery-Cottet) and I have really worked hard on improving his run and have seen massive improvement and this weekend really payed off for him. … He gave it everything he had."

Flames freshman Bobby Hammond edged Bianco (41st, 1:41:26) by three seconds to post Liberty's second-fastest finish (40th overall) in 1:41:23 with junior Freddie Shashaty the team's fourth scorer (90th in 1:45:28). Flames senior Dillon Lesniak finished 148th in 1:49:34. Liberty was without freshman Javier Lluch Perez from Spain, one of its top three triathletes, who made the trip but did not compete due to illness.

Sophomore Heather Ziebart was Liberty's fastest women's finisher, 58th overall, in Saturday's race, completing the course in 1:59:31. Junior Sarah Parker, who will also represent the Lady Flames at next weekend's USA Cycling National Championships in Grand Junction, Colo., was the second team member to finish in 2:10:05, 152nd among women. The other five Lady Flames were in the middle of the pack of 507 women, led by freshman Rachel Fulford (210th in 2:15:16). Liberty placed one spot behind Virginia Tech as a team and just ahead of No. 22 Virginia and No. 23 JMU.

"On the women's side of things, every one of them came into the team being brand new to triathlon and they've shown rapid improvement," Spencer said.