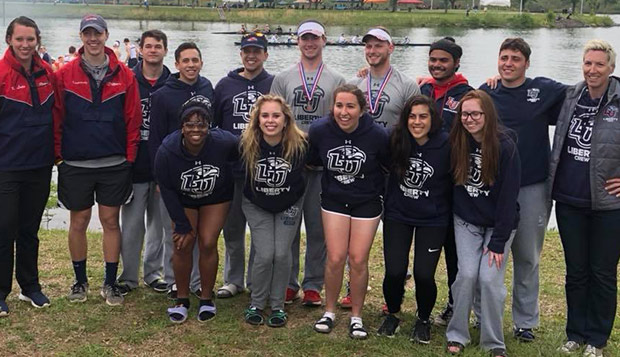 Jensen and Prior, who only started competing as a tandem in early March, held off a crew from St. Edwards to finish third in the 2,000-meter race in 7 minutes, 58.070 seconds, behind only boats from Washington & Lee and William & Mary.

"They had a really great start and it was a very exciting finish," Liberty third-year Head Coach Debbie Prowse said. "We were very happy with their bronze medal finish because it was the first time we've had a team medal at SIRAs since I've been here."

Sophomore Ryan Krupansky placed fourth in the Men's Single time trial to advance directly to Sunday's "A" finals, where he ended up fourth in the A final in 8:21.426.

"He did very well to place in the grand final," Prowse said. "He had some really tough competition up front and led the second pack of three boats in the final."

Liberty's Men's Novice 4 crew rowed by sophomore Jake Thomas and juniors Jeremy Damone, Cameron Anderson, and Isaac Cantor with freshman Sarah Nixon serving as the coxswain placed fourth in the "B" finals in 7:49.765.

"After the start, they were down and had to come back and row past boats from JMU and Georgia Tech," Prowse said. "They really improved on their sprint to gain some ground in that last 500 meters."

The Flames had finished 16th out of 27 boats in the time trials to advance to the semifinals, where they crossed the finish line fourth in their heat in 7:57.853.

"They got off to a tough start after being blown off course while they were lining up and had to readjust before rowing through a crew from Georgia State to come in sixth out of seven boats in 9:11:909, which was a PR for them," Prowse said. "They have made a lot of improvements and learned a lot this season and things have started clicking with them being more aggressive with added power."

Based on their performances and potential to gain speed over the next month, Prowse will send all four boats on to compete in the American Collegiate Rowing Association (ACRA) Club Championships on May 26-27 at Lake Lanier in Gainesville, Ga.