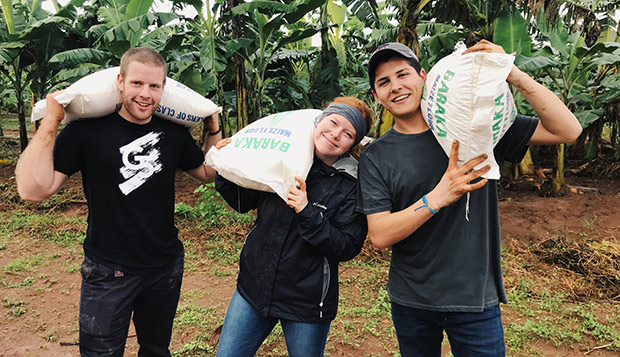 Matt Cruickshank (left) visited Rwanda with a team of 15 Psychology majors and a total of 71 Liberty students, who served in a variety of capacities over Spring Break in March.

"Rwanda was life-changing," Cruickshank said. "I learned more about God and His love and mercy there than I have in my entire life."

He said he was inspired by survivors of the genocide of 1994.

"After something so tragic that happened, when a million people died at the hands of family and friends, to see how God is so present there and how they have so much hope, you can't even understand it," Cruickshank said. "You see it and you can't believe it. It's amazing."

The team of 15 psychology students visited two schools, a psychiatric hospital, an observation camp, a widow's village, a reconciliation village, and random villages and homes where poverty is rampant.

"The Rwanda Reconciliation Village is where perpetrators and victims of the genocide live together," Cruickshank said. "I met a woman who had 47 members of her family killed, including her kids and husband, and now she and one of the two men who killed them live in the same home. She's forgiven him, and now her kids and his kids are engaged."

He was moved by the reconciliation he witnessed.

"There's no hate there, and that's convicting because if someone wrongs us, we condemn them," Cruickshank said. "If I can't forgive a referee for making a bad call on me and they can forgive somebody who killed their entire family, what's wrong with that picture?"

Liberty also sent a Christian Community Service (CSER) group that built homes, Nursing students who went to an area hospital, and Education majors who taught classes at area schools. Cruickshank's group mostly worked with Compassion International sponsored children. He had the opportunity to meet Moises, the child he and his girlfriend started sponsoring around Christmas.

"Moises and his father live in a remote village and to get to where we were, they had to take an hour-long bike ride because there is no road and then drive five hours," Cruickshank said. "I was actually the first white person they've ever seen."

On the trip he got to play a late-night soccer game with area youth and demonstrated spirit-led dance moves, delighting the crowd at a festive worship service.

"Revival's there," Cruickshank said. "It is a Christian country. It's amazing that someone who appears to have so little, actually has so much. There's joy in the littlest things, and everywhere you go, they're serving us, they're cheering for us, and we'd done nothing to deserve it. At the same time, you see their poverty and feel their hurt. I don't think I've ever cried as much as I did that week in my entire life."

Cruickshank has challenged himself to continue to be bold in his witness on the streets of Lynchburg, Va., this spring and back in his hometown of Waterloo, Ontario, this summer.

"My life will never be the same (after Rwanda)," he said. "The hardest thing is making sure it's not just a memory, but where my life is changed, not to forget it, but to use it in America. Rwanda needs love, but America needs love, too."