Men's swimmers and divers place 13th at nationals in Atlanta 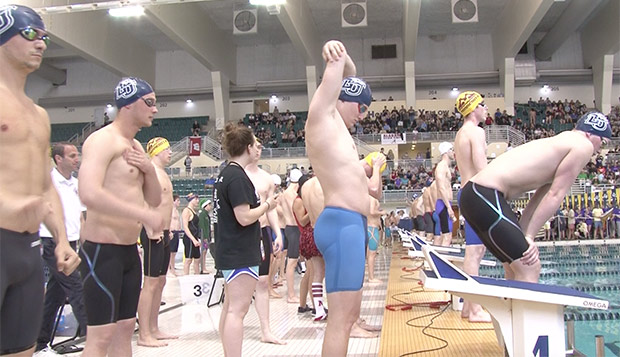 Ohio State won the men's national title, ahead of runner-up Virginia and third-place Georgia Tech. Factoring in the women's results, the host Yellow Jackets were the overall champions, followed by UVA and Ohio State. The meet attracted 2,100 swimmers from all over the country for a total of over 7,000 entries over the weekend.

"To have three divers able to score 42 points was huge," Liberty Head Coach Parker Spencer said. "(NCAA Division I Women's Diving Coach) Tori Wood has been working really well with them, taking guys who had never done the sport before to where they were able to place in the national championships, so she did a really awesome job and we were blessed to have her."

Sophomore transfer Noah Miller matched Campbell to score the most points among the dozen Flames' swimmers (18). He placed fourth in the 200-yard butterfly and swam a leg of the eighth-place 800-yard freestyle relay, which also featured Javier Lluch Perez of Spain, junior Charles Fernandez, and freshman Ben Klipp.

Fernandez, who represented Guatemala in the pentathlon at the 2016 Summer Olympics in Brazil, scored seven points in the 200 free and Klipp added four points by placing 17th in the 500 free.

Spencer expects to qualify at least as many swimmers and divers for next year's national championships, when qualifying standards will be higher and USA Masters Swimming will add regional meets to pare down the number of participants.

"It was a successful first year that we can build off," he said. "We are light years ahead of where we were in the first year of me taking on the triathlon team and starting up the cycling team. The good thing is we've got a very young team. … We have a really solid foundation."