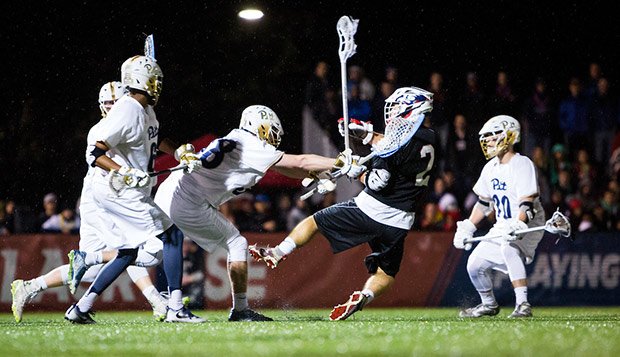 "It's always back and forth between me and him," Britton said of Gregory, Liberty's points leader with 21 goals and 27 assists on the season. "We kind of have and eye for each other with good chemistry, so it's awesome to play with him."

Britton received a fast-break feed from sophomore midfielder Carter Elliott in the left side of the box and sprinted past a Panthers defender before firing an overhand shot into the upper netting for the game's first goal less than two minutes after the opening faceoff.

"He's a hustler," Britton said of Elliott, who scored one goal and distributed three assists despite playing through an injury. "It was awesome to see him back out there."

A minute and a half later, junior midfielder Chase Wright drove from the right side and dealt one of his game-high five assists to Britton as he came out from behind the left side of the net. He reached high to catch the ball before shooting it low past Pitt goalie Kevin Hudson for an early 2-0 lead.

Wright then found Gregory open in the left side of the box, where he dodged a defender and fired a short-ranged shot into the upper netting to stretch the advantage to 3-0 before Britton completed his first hat trick at the 7:21 mark of the first quarter by receiving an entry pass from freshman midfielder Billy Zoeller in the left crease and placing a turnaround shot inside the left post.

The Flames (7-3) started off each quarter on a high note, scoring the first four goals of the first quarter, the first two of the second and third, and the first goal of the fourth, but let the Panthers (4-6) hang around later than they would have liked before finally fending off a fourth-quarter comeback bid.

"You've got to give Pitt a lot of credit," Liberty Head Coach Kyle McQuillan said. "They fought to the end and we didn't do a very good job … using the momentum that I thought we gained at times. We just gave it away. They stayed with it and were definitely a lot more consistent in their play tonight than we were."

Britton ended a 10-minute scoring drought with a turnaround shot set up by Wright with 7:48 left in the second quarter and Elliott and Britton put away assists from Wright to push Liberty's lead to 8-4 less than a minute before halftime.

Back-to-back goals by freshman attack Mateo Zumpano ignited the Flames' offense at the start of the second half. Sophomore midfielder Austin Aguilar (who won 18 of 25 faceoffs) set up the second after winning the ensuing faceoff and feeding Zumpano in the right side of the box for an open shot that extended Liberty's lead to 10-4.

The Flames took a 13-7 lead late in the third when sophomore attack Derrick Esh picked up a ground ball on the defensive end and sparked a fast break with a cross-field pass to Gregory, who faked a shot before driving past a defender for a higher-percentage finish. Early in the fourth, sophomore midfielder Elijah Britton set up Esh with a pass from behind the cage as he cut into the left crease for a point-blank shot that made it 14-7 before the Panthers outscored Liberty 5-1 over the final 12:05.

"They played really well, especially in the end," Caleb Britton said. "They were working well as a team and we kind of got lazy and they took advantage of their opportunities."

"Virginia Tech's always a big game," Britton said. "It's always awesome to play them, especially here at home where the energy's even higher. We just have to play our best game, play a full game, play a team game, and make sure everyone's on the same page."