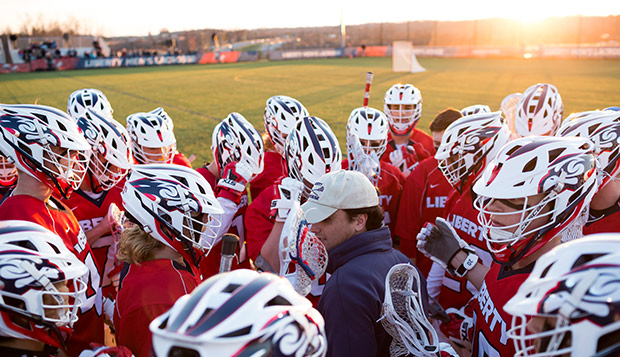 Flames Assistant Coach Brett Bernardo addresses his offense in a March 9 loss to No. 5 Colorado. (Photo by Nathan Spencer)

Liberty University's 11th-ranked men's lacrosse team rallied from four goals down to upset No. 4 Michigan State, 9-8, Saturday afternoon in its second game of the "Battle at the Beach" at the DE Turf Sports Complex in Frederica, Del.

The Spartans (8-1) are the highest-ranked opponent the Flames (5-3) have knocked off in their five seasons at the MCLA Division I level. The victory came less than 20 hours after suffering a 7-6 setback to No. 18 Connecticut to start the tournament.

"For Michigan State, today's game was very similar to our game (Friday) night," Flames Head Coach Kyle McQuillan said. "They came in and were definitely confident, maybe overconfident, as we were against UConn. We were hoping to win both games in this tournament, but it wouldn't have been the end of the world if we came away with a weekend split. I just didn't think it would come in this order."

MSU seized a 2-0 lead with back-to-back man-up goals in the first quarter.

"They jumped out on us early after we had penalties on our first two shifts," McQuillan said. "Before we knew it, we were down 3-0, but we had a really fantastic response. The resilience shown by these guys to not only come from behind, but to do it the day after the loss to UConn, was impressive."

The Spartans extended their advantage to 6-2 in the second quarter on senior defender Tom Smith's 80-yard shot into an empty net from the opposite box.

"At times in the first half, we ran a 10-man ride, which takes our goalie out of the net and gives us a man advantage," McQuillan said. "One way to beat that is to take a full-field shot into an empty net. It's a tough shot, but we were willing to give it in order to create pressure. Other than that goal, it was a successful tactic."

That was just one of the gambles Liberty's coaching staff took in an effort to keep Michigan State off balance.

"On defense, we alternated between man and zone to confuse them and on attack, we were playing guys at different positions, moving them all over the field," McQuillan said. "Mike Zumpano, our defensive coordinator, made some great switches, and Brett Bernardo, our offensive coordinator, kept their defense on its toes and their coaches guessing."

The Flames rotated sophomore attack Caleb Britton back to midfielder and he netted two goals, including the eventual game-winner in the fourth quarter, and one assist. Sophomore midfielder Carter Elliott, meanwhile, who missed most of the game due to injury, moved up on attack at times and scored a critical goal, as he had the night before.

Liberty trimmed the deficit to 6-4 by halftime and claimed a 7-6 lead in the third quarter before the Spartans tied it at 7-7 going into the fourth. Junior forward Sam Gregory, who led the team with three goals and three assists, set up Britton's final score for a 9-7 Flames advantage.

"They ran a set play and scored to pull within one goal with 15 seconds left before (sophomore midfielder) Austin Aguilar came up with a huge ground ball faceoff win and we were able to run out the clock," McQuillan said.

In net, sophomore Ryan Reynolds made 10 saves after allowing goals on the first five shots he faced.

"He got out to a very rough start and as a coaching staff we thought about pulling him, but we stuck with him, and in the second half he reversed his course and stood on his head," McQuillan said.

"We went back and forth and Jimmy stepped up," McQuillan said. "They had a pretty good faceoff guy and we hit them with different options, kept them guessing."

Before Saturday, the highest-ranked team Liberty had defeated was No. 7 Florida State last season. This month, the Flames upset No. 10 Arizona State on March 10 at the Liberty Lacrosse Field, a night after losing to No. 5 Colorado, also at home.

Liberty returns to Lynchburg, Va., to host its final three regular-season games — Friday against SouthEastern Lacrosse Conference (SELC) Northwest Region rival George Washington; the following Friday, April 6, in the annual "Midnight Mayhem" matchup against Pittsburgh; and Friday, April 13, against No. 8 Virginia Tech, a game that has decided the Northwest Region champion each of the past four years.