Flames give up game-winner to Huskies in final 25 seconds 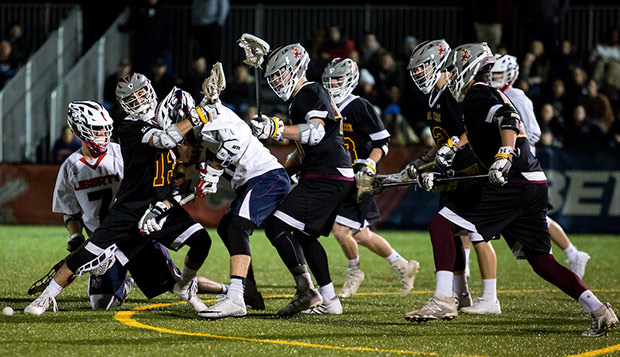 The Flames' attack runs into traffic against No. 10 ASU on March 10 at the Liberty Lacrosse Field. (Photo by Andrew Snyder)

In Friday's opening game of the "Battle at the Beach," a nine-school tournament at the DE Turf Sports Complex in Frederica, Del., Liberty University's 11th-ranked men's lacrosse team allowed No. 18 Connecticut to score the game-winning goal with 25 seconds remaining in a 7-6 setback.

"It was a close game, a low-scoring affair that went back and forth," Flames Head Coach Kyle McQuillan said. "They took an early lead by two and we tied it up at the half. Ultimately, they played tough and did what they needed to do to win."

Recent snowfall had melted by the time the Flames arrived for the 5 p.m. opening faceoff.

"It was cold, it was windy, it wasn't fun, but that's not an excuse for the way we played," McQuillan said.

Sophomore midfielder Carter Elliott, who was limited to very little playing time due to injury, returned and scored the go-ahead goal with just over eight minutes left in the fourth quarter for a 6-5 advantage.

However, the Huskies (3-1) responded by tying the game at the five-minute mark and held the Flames (4-3) scoreless for the rest of the contest.

"We were disappointed with our effort today," McQuillan said. "As a team, we didn't perform near to what we as coaches felt we were capable of. Defensively, we did some things well. Offensively, we definitely didn't do what we needed to do and left a lot of goals on the field."

"Ryan was the guy keeping us in this game, making a lot of great saves and making the biggest impact," McQuillan said. "(Sophomore midfielder) Austin Aguilar did enough, winning eight faceoffs and losing seven. UConn probably did better on ground balls than we did."

The Flames don't have much time to regroup with Saturday's second game against No. 4 Michigan State (8-0) set for noon.

"The biggest challenge is coming off (Friday's) bad loss and playing against arguably a much more challenging opponent," McQuillan said. "We need to fix some things. For us, the message is we've got to hit the reset button and to move forward against a pretty rested Michigan State team, which plays us (Saturday) and then (No. 8) Virginia Tech on Sunday."