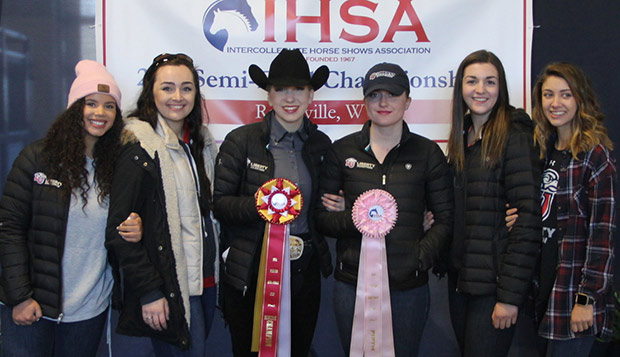 A total of 28 colleges and universities from eight regions were represented at the Semi-Final event, hosted by West Virginia University at the JW Ruby Research Farm in Reedsville, W.Va.

Competing in the Novice and Intermediate Horsemanship divisions, respectively, Mays and sophomore teammate Brianna Bass advanced out of Saturday's 16-rider preliminary round to Sunday's eight-rider finals, where the top four place-winners earned bids to the May 3-6 IHSA National Championships in Harrisburg, Pa.

"I could not be more proud of the way Erin and Bri rode this weekend," said Liberty Western Head Coach Lauren Eagles, who will take her first rider to nationals as a coach after qualifying as a Western rider twice at Missouri State. "Their riding has matured throughout this season and I can't wait to see what the future holds for them."

In the finals, Mays excelled in her rail work, the first phase of the competition, and improved her performance in the pattern section, where riders lined up and took turns guiding their horses through eight to 10 maneuvers. Her 73-point total score placed her second behind only the University of Findlay's Brandon Morin.

Bass was the first to ride in the Intermediate division and the judges rated her performance as fifth best with 71.5 points, one-half point out of qualifying.

"It was heartbreaking to see Bri miss Nationals by such a close margin, but I know she will be right back in the hunt year," Eagles said.

"They all have fantastic chances of advancing," Eagles said. "It's really exciting. They are peaking at the right time."