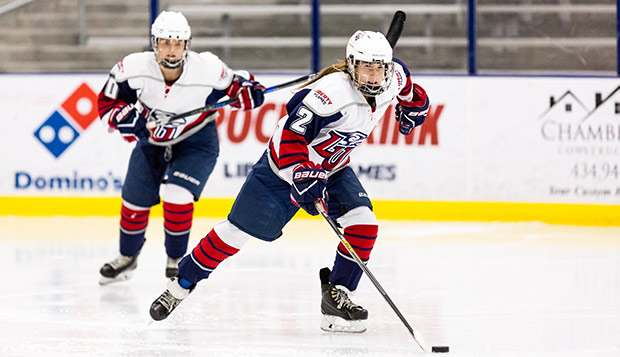 Lady Flames junior forward Lauren McDonald (2) has been a sparkplug on attack throughout the ACHA Division I National Championships. (Photo by Joel Isimeme)

Top-ranked Liberty University's ACHA Division I women's hockey team set up a showdown with second-seeded Adrian in Sunday's National Championship game by crushing Colorado in Saturday's second semifinal at the Ice Haus in Columbus, Ohio. The 12-1 triumph was one of the most decisive Final Four victories in ACHA DI women's hockey history and sends the Lady Flames to their fourth final in the past six seasons at 5:15 p.m. back at the Ice Haus, webcast live by the ACHA on YouTube.

The Lady Flames (28-3) outshot the Buffaloes (25-9-1) by a 52-34 margin and scored five power-play goals out of 12 chances while their defense killed Colorado's three opportunities with a man advantage.

Liberty jumpstarted its attack just 34 seconds after the opening faceoff when sophomore forward Mackenzie Carroll reset the offense around the red line and sent an outlet pass to junior forward Lauren McDonald on the left side. McDonald used her speed to skate the puck into the offensive zone before sending it across the slot onto the tape of sophomore forward Alex Smibert, who one-timed her shot in the right circle past Colorado goalie Natalie Warnes.

Deena Birney, stationed out front, redirected freshman defenseman Sydney Pierce's shot from the left point to fellow sophomore forward Rachel Gibson who lifted a quick wrist shot from the left crease into the top netting at the 13:40 mark.

Less than three minutes later, after graduate goalie Chantal Kerr saved a quality Colorado shot, Liberty extended its lead to 3-0 when senior defenseman C.J. Tipping sent a pass up to Smibert in the right circle, where she put a shot on goal before freshman forward Shannon Fehr poked in the loose puck.

Exactly a minute and a half later, after Warnes was replaced by Lexi Hartmann in net, the Lady Flames capitalized on a power play with Fehr one-timing Smibert's crossing pass from the right side into the left side of the cage for a back-door finish that put the Lady Flames up 4-0.

Colorado trimmed the deficit to 4-1 when forward Maura Kieft unloaded a slap shot past Kerr 15 seconds after the second-period faceoff.

With 9:13 left in the second period, Tipping launched a power-play shot from near the blue line through traffic that ripped past Herring into the left netting for a 5-1 advantage. Less than a minute later, Liberty scored right off the faceoff in the offensive zone when freshman forward Shelby Bradford tipped in a deflected turnaround backhanded shot by sophomore forward Vanessa DeMerchant. Fast forward 45 seconds and Tipping fired another shot from the point through a screen into the top left corner of the cage. Less than 45 seconds after that, Chelsey Greenwood won a faceoff in the right circle and put a shot on goal, which Carroll finished in the slot directly off the rebound. A minute and a half later, McDonald sent a cross-crease shot from the right side toward the left post where sophomore forward Rachel Gibson batted it in mid-air into the top-left corner as the Lady Flames opened a commanding 9-1 lead before the second intermission.

Sophomore forward Aly Morris tapped in DeMerchant's shot from the high slot for Liberty's 10th goal at the 18:12 mark before DeMerchant scored unassisted after skating the puck off of her own end line, weaving her way up the left wing, swooping in, and threading a shot inside the left post to push the Lady Flames' lead to 11-1 with 14:51 to go.

Morris stole the puck back on the right wing and dropped a pass back to McDonald at the top of the right circle where her shot split defensemen and veered inside the right post for the 12th and final goal at the 12:00 mark.

The Lady Flames will contend for their second national title in four seasons when they face Adrian, a 1-0 overtime winner over two-time defending champion Miami (Ohio) in Saturday's first semifinal. Liberty dethroned the RedHawks for the university's only title in 2015.

In the teams' only meeting this season, Nov. 17 in Michigan, the Lady Flames beat the Bulldogs, 4-1, to overtake them at the No. 1 spot, where they have remained ever since.

Lady Flames forward Vanessa DeMerchant (8) assisted one goal and scored another after a coast-to-coast drive in the third period. (Photo by Joel Isimeme)