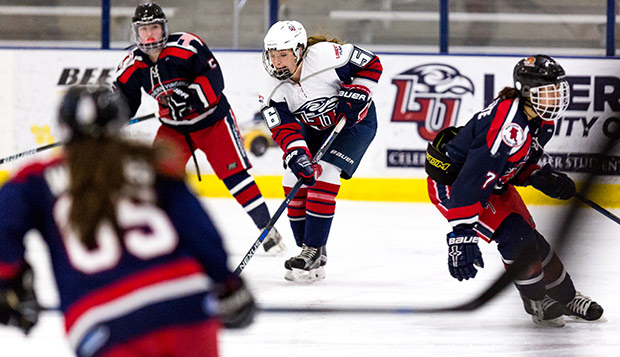 "They are a real strong team," Lady Flames Head Coach Chris Lowes said. "They looked really dangerous (against MSU) and certainly in an elimination game, they are going to be tough to beat. They are as talented as any team we have faced. It'll be a good game."

On Thursday, the Lady Flames dictated play from the outset, but only managed one goal through the first two periods before tacking on three in the third.

"They looked like they had some desperation and they gave us their best shot, but I liked the way we responded," Lowes said. "It was a fun game to be a part of."

Rupoli made an excellent save of a shorthanded shot from the right circle after a turnover in Liberty's defensive zone at around the 10:00 mark. Moments later, in the closing seconds of a power play, Lady Flames sophomore forward Deena Birney had her initial shot blocked by the stick of a Minnesota defenseman before she pounced on the rebound and fired it off the chest of Golden Gophers goalie Alexandra Morris. The loose puck bounced to sophomore forward Alex Smibert in the right crease where she one-timed the putback past Morris for a 1-0 advantage.

Liberty padded its lead to 2-0 at the 13:49 mark of the third period after the Lady Flames reset their attack from their own blue line and Smibert sent a feed from along the left boards up to junior forward Lauren McDonald, who sniped a left-handed shot from the high slot off the top right post and into the back of the net.

Freshman forward Shelby Bradford extended the advantage to 3-0 with 11:55 remaining in regulation by poking the puck through Morris' pads as she followed her own shot in the right crease.

The Lady Flames reached a 4-0 lead for the second night in a row on a similar score five minutes later when freshman forward Shannon Fehr first jabbed at the rebound of a shot by senior defenseman C.J. Tipping from the point and then slammed home the loose puck left near the right post.

Like the rest of the tournament's Final Four qualifiers, the Lady Flames will enjoy a day off on Friday before resuming play on Saturday against Colorado, with the 3:15 p.m. contest streamed live by the ACHA.

The Buffaloes' defense is anchored by goalie Lexi Hartmann (10-3), who has posted six shutouts this season with a 1.50 goals-against average and a 92.9 save percentage. With her seventh shutout against Minnesota, Rupoli (11-1) is now one shy of the ACHA DI lead and boasts a goals-against average right around 0.75 with a save percentage higher than 95.0, ranking her first in the league in those stats among goalies who have played at least 500 minutes.

"Nadia was a rock for us in the net," Lowes said. "She played really solid. Our penalty kill was very good. We were very disciplined and only took three penalties and the shots they did get through, Nadia was able to handle."

It has yet to be determined whether Rupoli or Wednesday's first-game starter Chantal Kerr will start in net against Colorado.