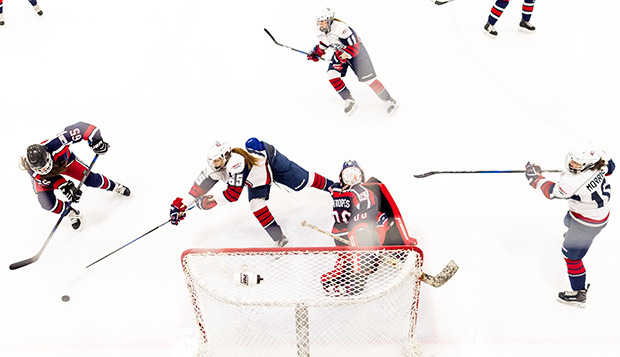 Sophomore forward Rachel Gibson stretches for the puck in to try to finish into an open net in a March 3 game at the LaHaye Ice Center. (Photo by Joel Isimeme)

Ranked No. 1 for all but one poll this season, Liberty University's ACHA Division I women's hockey team is a favorite to claim its second ACHA DI National Championship this weekend at the Ice Haus in Columbus, Ohio.

"The girls are ready to get going," said Lady Flames first-year Head Coach Chris Lowes, who guided Liberty's DII men's team to the past two national title games. "We're as healthy as can be at this point and they're excited to get back to playing competitive games and competing together."

In 2015, the Lady Flames became the first of Liberty's five teams to raise the championship cup after defeating Miami (Ohio) University, 4-1 in the final.

The RedHawks (21-6), seeded fifth in this week's tournament, have captured three of the past four titles.

Liberty (25-3) opens tournament play Wednesday at 9:30 p.m. in the first game of a best-of-three quarterfinal rematch with No. 8-seeded Minnesota (21-8-1), webcast live by the ACHA on YouTube. Last year, Liberty won two straight contests to exact a measure of revenge against the Lady Gophers, who had upset the top-ranked Lady Flames in the 2013 championship game to deny them their first title bid.

Liberty has reached the past five ACHA DI Final Fours. The Lady Flames hope to extend that streak to six and earn a day of rest before Saturday's semifinals by again ousting Minnesota in two games.

The tournament schedule with webcast links for each game is available on the ACHA National Championships website.

All but the Lady Flames' five freshmen have national experience, with senior forwards Courtney Gilmour (9 goals, 5 assists) and Chelsey Greenwood (7G, 11A) and defenseman C.J. Tipping (10G, team-high three game-winners, 7A) having competed in the last three tournaments, including two title matches.

"They had a good run (to reach the finals) last year, so the girls know what to expect," Lowes said.

Offensively, Liberty is sparked by junior forward Lauren McDonald (19, team-high five on the power play, 13A) with supplemental scoring from freshman forwards Shannon Fehr (9G, 17A) and Shelby Bradford (9G, 11A) and sophomore forwards Deena Birney (8G, 16A), Alex Smibert (9G, 12A), and Aly Morris (7G, 13A).

"Hopefully our depth will be a good thing for us over a week of games and we will see different people step up and get production from different areas," Lowes said.

He expects both sophomore Nadia Rupoli and graduate Chantal Kerr to get their share of playing time in goal.

Meanwhile, Liberty's DII women's team is making its first appearance in the ACHA National Championships after posting its first winning season with a 12-3-1 record.

"The last two years have been a huge turnaround," Lady Flames Head Coach Sara Niemi said. "We have high expectations to try to make it to the finals at nationals. We are going to go out and take it game by game."

The Lady Flames will try to turn the tables on the Bulls after letting a 4-1 third-period lead slip away in a 5-4 loss in the opening game of their first College Hockey East (CHE) playoffs on March 3. Only the top two teams out of the two six-team pools will advance to Saturday's Final Four.

All three games of pool play as well as both of Saturday's semifinals will be held at the Chiller Easton rink. The winners will advance to Sunday's 2:15 p.m. championship game in the Ice Haus.