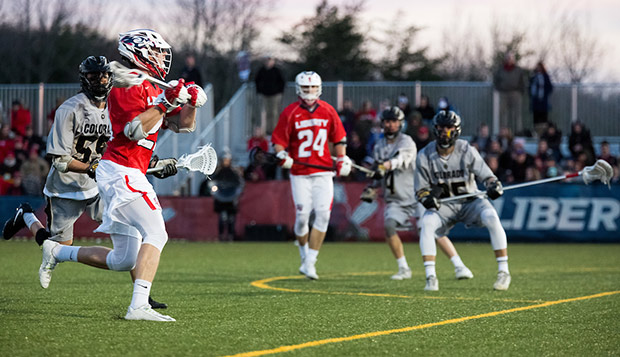 Liberty University's No. 19-ranked MCLA Division I men's lacrosse team waged another high-scoring slugfest with No. 5 Colorado before a fourth-quarter comeback bid fell just short in a 17-15 setback, Friday night at the Liberty Lacrosse Field.

Last March 24, on their Spring Break road trip to Boulder, Colo., the Flames rallied before coming up on the short end of a 20-16 shootout.

On Friday, the Flames (2-2) jumped out to an early 4-0 lead before allowing the Buffaloes (4-1) to tie the game by halftime and romp over them, 8-2 in the third quarter.

"We were getting caught in transition and we were not marking up on our guys down low," Liberty Head Coach Kyle McQuillan said.

Liberty outshot Colorado, 46-34, but missed opportunities to increase its lead in the first half in situations when the Buffaloes were two players down due to penalties.

"We've got to take advantage of our opportunities," McQuillan said.

Esh then rifled in a stationary sidearmed shot from the right side for a 4-0 lead before Colorado attack Christian Snodgrass converted on a two-man advantage and the Buffaloes added another goal seconds after the penalty expired to cut it to 4-2 with 5:00 left in the first quarter.

Just 33 seconds later, Flames midfielder Chris Mickel tipped a long outlet pass from sophomore goalie Ryan Reynolds into the netting of Gregory's stick before he assisted Britton for a fast-break finish. But the Buffaloes answered a minute later on a point-blank shot by Brock Neubauer despite heavy pressure.

After Esh's first shot of the second quarter hit the left post, Elliott's second attempt ripped the back of the net to extend the Flames' advantage to 7-4 before CU midfielder Ross McDonald responded with a shot from the top of the box. Senior attack John Roach, who paced the Buffaloes with four goals, netted a turnaround shot from the right side before Esh finished a rebound of Britton's blocked point-blank shot.

Reynolds made a save and launched an outlet pass from on his knees to Flames midfielder Win McKeever, who ignited the transition before feeding Gregory, who found Britton for a fast-break finish and 9-6 Liberty lead.

Colorado converted the next three goals before Reynolds and Lukas Tophoven made spectacular back-to-back body saves of point-blank shots in the closing minute of the first half, the second a behind-the-back putback, preserving the 9-9 tie.

After falling down 17-11 in the third, Elliott set up Gregory for a fast-break score from close range. Then, Gregory spun and dodged a defender to trim the deficit to 17-13 with his shot from the top of the box. Elliott followed with a fantastic scoring run through the left crease before Gregory netted a sharp-angled shot from the left side for the final score with 2:26 left in regulation.

Britton and Esh both netted four goals for Liberty while Gregory had three goals and two assists. Elliott contributed two goals and three assists. Reynolds made 13 saves and Aguilar won 23 out of 37 faceoffs in addition to picking up 11 ground balls.

It was only the Flames' second loss in their past 30 home games but second in their last four.

Liberty will host another highly ranked opponent, No. 10 Arizona State, in Saturday's 8 p.m. showdown back at the Liberty Lacrosse Fields. That game will again be webcast live by LFSN and carried on the Big South Network.