Flames' home opener vs. WVU to be streamed on WatchESPN 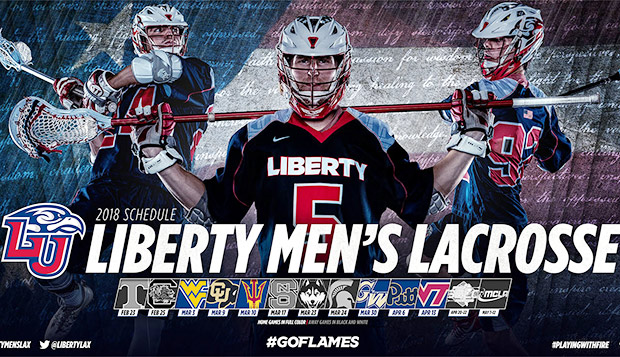 This will be the first non-NCAA men's college lacrosse regular-season game to be streamed on the ESPN platform, available to fans across the country. The coverage, produced by the Liberty Flames Sports Network (LFSN), is being promoted on the MCLA website.

"This is a great opportunity not only for Liberty Lacrosse to showcase itself to a much larger potential audience … and help us increase awareness about our program, but also for the MCLA to be represented on a national level," Flames Head Coach Kyle McQuillan said. "People are excited about it and it gives Liberty a little more exposure."

The contest between the Flames (1-1) and Mountaineers (2-1) is one of two Liberty home games that will be aired on WatchESPN this spring, with the April 6 "Midnight Mayhem" matchup with Pittsburgh also be carried by the network.

Most of Liberty's home games this season (all but the March 30 Northwest Region matchup with George Washington) will be streamed live by LFSN, complete with play-by-play and color commentary, and carried on the Big South Network. McQuillan said LFSN is in negotiations for all Flames home games to be simulcast on the ESPN3 platform for the 2019 season and beyond.

"The opportunity to roll it out on the ESPN3 network will give us a broader audience, which helps with recruiting and in promoting Lynchburg, Va., as a desirable location for teams to want to come play away games," McQuillan said.

This is the first season Liberty has been able to attract high-profile programs, such as No. 5 Colorado at 6 p.m. on March 9 and No. 6 Arizona State at 8 p.m. on March 10, to the Liberty Lacrosse Fields.

"Typically, we've done a lot of travel to play ranked teams," McQuillan said. "Outside of Virginia Tech, we haven't really had any top-tier programs coming here. Being able to provide something unique such as live national coverage will hopefully continue to help us bring top-level teams to Lynchburg."

"We been blessed to build a relationship with ESPN where they trust that the product we provide in all of our broadcasts meets the standards for the WatchESPN platform," he said. "Students from Liberty's School of Communication and Digital Content are able to gain real hands-on learning experience through these broadcasts. We are excited for the exposure they will gain through this opportunity."

McQuillan doesn't want the media limelight to distract the Flames from their focus of executing their game plan against WVU.

"We want to rebound from our loss (at then-No. 15 South Carolina on Sunday) and get back on track," McQuillan said. "Like our season opener at (Northwest Region rival) Tennessee, it's a very important game in determining if we make it into the SELC playoffs. We need to use it to help us build some momentum heading into a very difficult 28-hour period next Friday night against Colorado and Saturday night against Arizona State."

He said those games give the Flames plenty of potential to rise up the MCLA rankings.

"We play five more teams ranked ahead of us this season, games we must win if we want to be one of the teams considered (for at-large berths) in the national tournament conversation at the end of the year," McQuillan said. "It is a very difficult and competitive schedule, but it gives us lots of opportunities to prove ourselves."