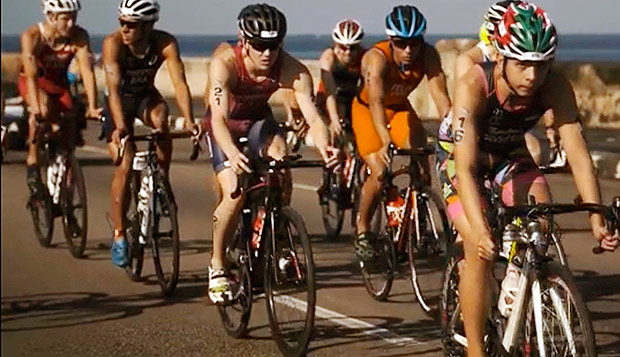 He finished the 1.5-kilometer swim, 40K cycling stage, and 10K run in 1 hour, 53 minutes, 12 seconds, less than three minutes after the winner, Alexandre Nobre of Portugal (1:50:23). Sonnery-Cottet ranked second after his swim time of 18:52 before staying with the main pack on the bike in 59:16 and maintaining his ninth-place status in the run in 34:23.

"He did great against very tough competition and I am excited for the potential he showed competing at this level," Flames triathlon Head Coach Parker Spencer said.

Sonnery-Cottet's points earned at the race will add to his cumulative total to determine if he qualifies to represent France at the Sept. 12-16 ITU U23 World Triathlon Series Grand Final in Queensland, Australia, where 5,000 of the world's best elite and Age-Group triathletes from 46 countries will compete.

A few other Flames triathletes will travel to international qualifying races as they contend to represent their homelands in Australia. On the weekend of March 10, freshman Javier Lluch Perez, who won the 2016 European Triathlon Junior Championships in Portugal, will travel to Palamós, Spain, for another World Championship qualifier.

Starting with the October 2012 World Age Group Championships in Auckland, New Zealand, Spencer has competed in nine triathlon or duathlon World Championships over the past six years as an amateur.

"They're trying to do it on a professional level, which is much harder," Spencer said.

Freshman Bobby Hammond from New Jersey, junior Freddy Shashaty from Richmond, Va., and spring semester additions Giovanni Bianco from Italy and Levente Lukacs from Hungary will compete in the developmental race. They need top-three overall finishes to earn professional status and put themselves in better position to make their countries' Olympic teams.

Sonnery-Cottet, Lluch Perez, and freshman Joan Colino Calomarde from Spain, and Jorge Silva Cabrera from Mexico, who will enroll at Liberty in the fall, will compete in the professional race. Results from both races, as well as a May 6 CAMTRI American Cup race in Richmond, Va., will count toward each triathlete's points totals as they seek to qualify for the World Championships.

Spencer will send his top seven men's and top women's competitors to the April 27-28 USA Triathlon Collegiate Club National Championships in Tuscaloosa, Ala.