Faceoff struggles hinder No. 17 Flames in loss at No. 15 USC 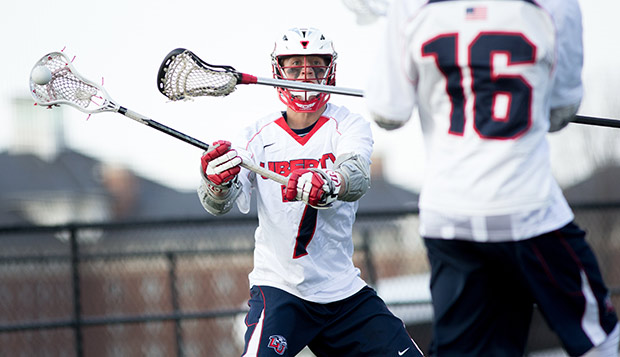 Sophomore attack Derrick Esh works the ball around the perimeter in a game last season at the Liberty Lacrosse Field, where the Flames will face WVU in their home opener, Saturday at 3 p.m. (Photo by Kevin Manguiob)

Time of possession is not nine-tenths of the law when it comes to winning men's lacrosse games at the MCLA Division I level, but it does make a difference.

Liberty University's men's lacrosse team found that the hard way in Sunday's contest at 15th-ranked SouthEastern Lacrosse Conference (SELC) rival South Carolina, which improved to 7-0 after winning more than two thirds of the faceoffs and controlling the ball for approximately two-thirds of play in a 10-8 victory over the 17th-ranked Flames (1-1).

"It was a very close game throughout, with the lead going back and forth," Liberty Head Coach Kyle McQuillan said. "We got a couple fast-break goals, but out of the game's 60 minutes, South Carolina probably had possession for 40 minutes. We were playing way too much defense for us to get the victory today."

He felt confident going into halftime with a 5-4 lead after sophomore midfielder Carter Elliott (3 goals, 2 assists) netted his third go-ahead goal of the first half just two seconds before the intermission.

"South Carolina is a very aggressive defensive team and you can't go in there and get pushed around," McQuillan said. "We came out and stood our ground and did a fantastic job with that in the first half before losing that in the third quarter, when they outscored us, 5-2."

Junior attack Sam Gregory (3G, 2A) was held scoreless in the first half before netting the Flames' final three goals to bring them within 7-6, 9-7, and 9-8. But that's where the comeback stalled as the Gamecocks added an insurance goal in the closing minutes of regulation.

Sophomore attack Derrick Esh (2G, 1A) was the only other Liberty goal-scorer with freshman midfielder Mateo Zumpano adding an assist.

"We definitely needed our attack to be more a part of our success today," McQuillan said. "Our other attackmen didn't capitalize on the handful of opportunities they were given. I was surprised to see it turn into more of a defensive battle than we anticipated."

Defensively, sophomore goalie Ryan Reynolds made 20 saves and the Flames' back line that features several freshmen kept USC from breaking the game open.

"We were able to make mistakes and play poorly and not have equal possession and still keep the game close," McQuillan said. "For the amount of time we had our backs against the wall, our defense did a good job. Ryan had a great game in net. We just played way too much defense."

Liberty's possession problems started in the faceoff circle, where sophomore Austin Aquillar, who had won 15 of 18 tries in Friday's 19-9 rout at Tennessee, was successful on only 4 of 13 attempts on Sunday.

"It is tough to be in those games when you are losing that many facoffs right off the bat," McQuillan said. "On a lot of them, they were tying us up and it was turning into a ground-ball battle which we were losing. We've got to be able to learn and adapt. South Carolina did get some lucky bounces, but this was a game we expected to win and we did not expect to be outworked in the faceoff circle."

He is hopeful the Flames can get back on track when they host SELC Northwest Region rival West Virginia on Saturday, with the first faceoff set for 3 p.m. at the Liberty Lacrosse Fields.

"We won't allow this loss to define us and dictate the rest of our season," McQuillan said, noting the Flames have to "right the ship" quickly as they host No. 7 Colorado on March 9 and No. 5 Arizona on March 10.

But first, a win over WVU (3-1) is imperative for the Flames to stay in contention for a fifth consecutive trip to the SELC Tournament, April 20-22 in Atlanta, with a bid to the MCLA DI National Championships in Salt Lake City offered to the winner.