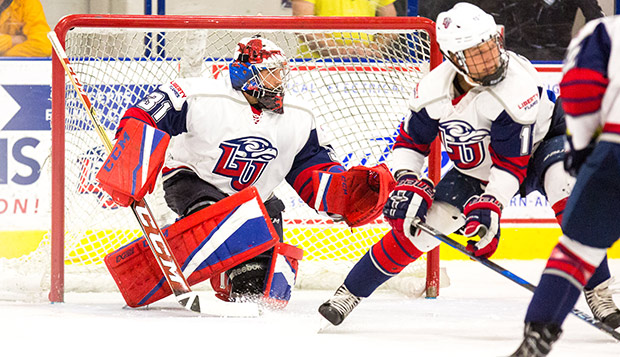 Freshman forward Cole Gammer netted the game-winning goal on a two-on-one rush midway through the third period to lead Liberty University's 10th-ranked ACHA Division I men's hockey team to a 2-1 triumph over No. 15 Stony Brook, Sunday at the Ice Line Quad in West Chester, Pa.

The Flames (30-6) extended their program-record winning streak to 19 games by successfully defending their ESCHL tournament crown. They had clinched their first autobid to the March 8-13 ACHA DI National Championships in Columbus, Ohio, by capturing the ESCHL regular-season title.

"Cole is playing great for us," Liberty Head Coach Kirk Handy said, noting that he started alongside senior Grant Garvin and sophomore Quinn Ryan, who set up Gammer's goal. "Quinn and Garvin and those guys played well for us tonight and Gammer had a real nice shot. That was a big goal for us."

"It was well deserved as they outshot us, 37-25," Handy said. "Cole was fantastic for us today, and he has been a big part of our team's success this season."

Freshman forward Ryan Cox lifted Liberty to a 1-0 lead with 11:45 left in the first period when he received assists from sophomore defenseman Matt Cruickshank and sophomore forward and head captain Josh Hamilton. Cox skated across the blue line before quickly releasing a shot through the five hole of Stony Brook goalie Brandon Rathwell.

The Seawolves (20-8-4) tied the contest at 1-1 when Ari Benjamin finished feeds from Frank Coscia and Brendan Calello with 2:49 to play in the second period.

"It was a tough battle, very similar to the type of game we expect to have at nationals," Handy said. "I'm real proud of our team. The guys battled hard against Stony Brook, which is a solid hockey team, and competed hard today. One of our goals was to win the (ESCHL) championship, and we were able to do that again today. That's a key thing for us, to have a national tournament feel before nationals."

Handy said Liberty took a team approach to containing Stony Brook's attack, shutting it out in the third period.

"There were a lot of guys who played well, more as a five-man unit," he said. "They took ownership of playing team defense with five men coming back. They played smart when we had the lead and continued to battle and work hard.

"I liked our game a lot better tonight," Handy added, comparing it to Saturday's 4-2 semifinal win over Delaware. "We competed harder tonight, and you could tell there was a desire to win. There are still things we can refine, and the guys know that we need to work hard to get better going into nationals."

The Flames will face seventh-seeded Central Oklahoma in their opening contest, March 10 at 5 p.m. in the Ice Haus. All the tournament pairings are available on the ACHA website.

"They're the defending (ACHA DI) national champions, and we're looking forward to it," Handy said. "We have full confidence in our team and our players, and we have two weeks of practice before then to prepare."

Stony Brook will play Pittsburgh in its first-round game at nationals on March 8.