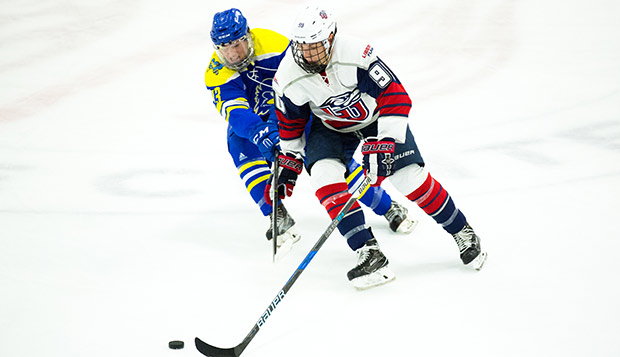 Seeking to add a second tournament championship to its first regular-season title in only its second season in the Eastern States Collegiate Hockey League (ESCHL), Liberty University's ACHA Division I men's hockey team recovered from a slow start to extend its program-record winning streak to 18 games, Saturday at the Ice Line Rinks in West Chester, Pa.

The Flames (29-6) scored three unanswered goals in the third period to turn a 2-1 deficit into a 4-2 triumph over Delaware in the tournament's South Division final, outshooting the Blue Hens, 42-32, and beating them for the fifth time this season. Liberty will face Stony Brook — a 3-2 winner over ESCHL newcomer New York University in Saturday's North Division final — in Sunday's 1 p.m. championship game, a rematch of last year's final.

"We learned a lesson today that we have to be ready to compete in the playoffs," Liberty Head Coach Kirk Handy said.

Delaware seized an early 1-0 lead on a power-play goal by center Cole Zucker at the 13:19 mark of the first period before Liberty sophomore defenseman Matt Cruickshank netted the equalizer with his second goal of the season less than four minutes later off an assist from sophomore forward Quinn Ryan.

Just over a minute and a half later, Colin Emerick lifted the Blue Hens back on top off an assist from Kevin Felice and they carried that 2-1 advantage into both intermissions after a scoreless second.

"We didn't play well in the first period at all," Handy said, noting that Delaware held a 12-7 edge in shots. "In the second period, we had a big penalty kill and Cole Burack made some big saves for us in goal, but we ran into some penalty problems. Our discipline has to be a whole lot better (in Sunday's final)."

Freshman forward Cole Gammer finally gave the Flames the spark they needed with 14:26 remaining in regulation, burying a shot from the slot off assists from freshman linemates Jordan Bochinski and Devin Pierce. Nine minutes later, Bochinski converted the game-winner by redirecting a beautiful shot on net from the point by sophomore defenseman Basil Reynolds for a 3-2 Liberty lead.

Reynolds also assisted junior defenseman Zane Schartz's empty-netter from nearly the length of the ice after the Blue Hens removed goalie Chris Pontirello for the final minute of action.

"This was a team comeback and guys like (sophomore forward and head captain) Josh Hamilton played a great game for us and (senior forward and alternate captain) Tim Bierema had some big shifts for us and on penalty kills," Handy said.

The Flames must be better prepared for Sunday's showdown with the Seawolves, who will be looking to avenge last year's loss in the final that snapped their four-year run as ESCHL tournament champions.

"We have to start on time in tomorrow's championship game," Handy said. "This was a good learning lesson for us. We have to play a full 60 minutes. We can't rely on comebacks all the time."