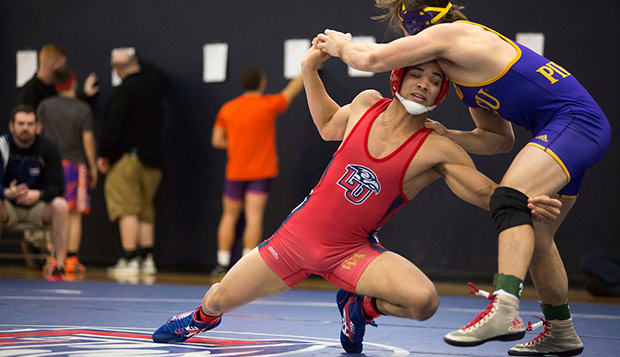 The NCWA National Duals champion Flames will send 16 wrestlers who qualified with top-five finishes Saturday to Allen, Texas, for the March 8-10 NCWA Grand National Championships, where they will contend for their second sweep of national titles in four seasons after first accomplishing the feat in 2015.

"I was really impressed with their team," Flames Head Coach Jesse Castro said of runner-up Apprentice. "This is the toughest conference in the country, statistically."

Junior captain Dominick Johnson defended his 285-pound MAC tournament championship after finishing third as a freshman and is optimistic Liberty can complete its quest for a second national championship two weeks from now in Texas.

"We'll repeat if we can stay on track with the way we are now," said Johnson, who finished fifth at nationals last season. "I feel like we're really hitting a peak at this point in the season and that we're ending up right where we need to be."

Scott, who transferred in from NCAA Division III Washington & Lee, is now 28-8 and ranked fourth in the NCWA 165-pound rankings. "It's been great," he said. "The program's awesome here. Coach Castro's awesome, and all the guys, we have really good team camaraderie."

Since the Flames scheduled mostly tournaments featuring NCAA Division I, II, and III programs during the regular season, it was Scott's first time facing most of his opponents. That included ECU's Peter Becher, ranked seventh in the NCWA, who he took down 10 seconds into the sudden-death overtime period for a 7-5 decision in the final.

"I came into the National Duals not having wrestled a single NCWA opponent," Scott said, noting that the higher-level competition prepared the Flames well for the postseason. "We've got good guys at every weight class. We've got a lot of freshmen, so next year we could have a much tougher lineup."

Stewart (16-4) won his three matches by decision, including the championship bout over Queens' Devinaire Hayes, 5-4, by reversing back in the final minute of the third period.

McIlhenny advanced to the 184-pound championship match by recording two falls over Apprentice's Devin Meredith in 3 minutes, 59 seconds, and Clemson's Noah Wright in 6:20. He opened an early lead on Apprentice's Wes Sorey with a takedown in the first period of the final before putting him in a cradle lock for two more points and trading reversals for a 6-3 lead at the end of the second period on his way to a 9-3 decision.

Amos raised his record to 27-2 with first-period pins over Tennessee's Robert Schofner and UCS's Benjamin Cupido, an 11-4 decision over Clemson's Danny Falconer, and 6-3 decision over Queens' Drew Barrett in the championship bout.