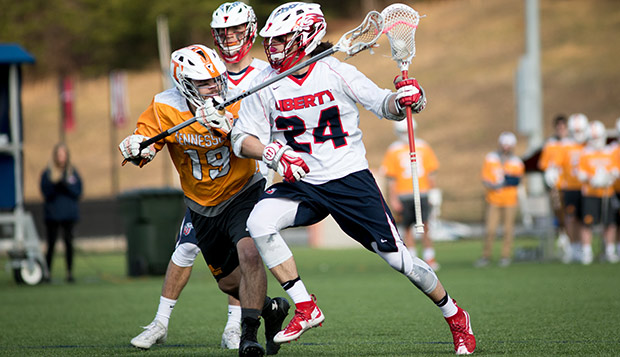 Newcomers had a chance to put their stamp on Liberty University's MCLA Division I men's lacrosse team as it opened the 2018 season Friday night at SouthEastern Lacrosse Conference (SELC) Northwest Region rival Tennessee with a 19-9 victory over the Volunteers (2-2).

Sophomore attack Austin Aguilar, who took faceoffs for NCAA Division III Bridgewater College last season, won the opening scrum for the 17th-ranked Flames and Billy Zoeller, who transferred from NCAA DIII Gettysburg College this semester, capped the scoring in the final minute of the fourth quarter.

Aguilar went on to win 15 out of 18 faceoffs and was one of four Liberty players to record hat tricks in the 10-goal triumph, joining sophomore midfielders Carter Elliott (5 goals, 1 assist) and Derrick Esh (3G) and sophomore attack Caleb Britton (3G).

"Austin is not a traditional FOGO (faceoff and get off) player," Flames Head Coach Kyle McQuillan said. "Coming in for his first game, he showed he can be dominant in the faceoff circle, but also take the ball downfield and be a threat to score."

Esh lifted Liberty to a 1-0 lead in the first quarter and Britton put the Flames up 2-0 less than three minutes into the action before Tennessee got on the scoreboard. Elliott made it 3-1 by finishing off a beautiful assist from junior attack Sam Gregory (1G, 3A) before Britton netted an unassisted goal on a low, hard shot to push Liberty's lead to 4-1 by quarter's end.

"We came out really strong and set the tone early," McQuillan said.

Aguilar and Britton opened the second-quarter scoring before the Volunteers responded to stay within striking distance at 6-2. Esh's second and third scores were followed in quick succession by goals by junior midfielder Chase Wright (2G, 3A) to stretch the Flames' advantage to 10-2 midway through the second before Elliott finished his hat trick and Gregory answered a Tennessee goal with one of his own, extending Liberty's lead to 12-3 before halftime.

Freshman attack Mateo Zumpano responded to a UT score by netting his first goal as a Flame before the Volunteers tallied consecutive goals for the only time in the contest, trimming the deficit to 13-7.

"Tennessee had a relatively successful third quarter, but overall we were in control of the game," McQuillan said. "They played physical right up to the end and it got a little chippy in the fourth quarter, but I was proud of the way our guys were able to stay disciplined, stay out of the penalty box, and stay healthy, to finish out our first game with a win and to show as much respect as we can both for the game and for Tennessee."

Junior goalie Brayden Harriman came up with a clutch save to stop the Volunteers' scoring surge before Elliott converted top shelf and assisted Britton, who completed his hat trick for a 15-7 advantage.

Aguilar capitalized on a man-up opportunity to cap the Flames' third-quarter scoring before Elliott scored off an assist from senior midfielder Brett Miller to extend Liberty's lead to 17-8 and Aguilar repaid a UT score by finishing off his hat trick to make it 18-9.

"With 19 goals, we did a good job of spreading the wealth a little bit," McQuillan said. "For our first game, we were able to accomplish what we wanted, to create some momentum and gain some confidence going into Sunday's game at (No. 15) South Carolina, which will be a tougher test."

The Flames have only faced the Gamecocks once in the four seasons they have competed at the MCLA DI level, beating them 12-9 in the quarterfinal round of the 2016 SELC Tournament. McQuillan expects a brutal clash Sunday at 1 p.m. at USC, which is off to a 6-0 start.

"They're a very talented team that plays with a lot of physicality," McQuillan said. "They have a lot of great players and they play a very aggressive style of defense that makes teams uncomfortable on attack. They like to apply pressure and beating them one-on-one is very difficult." 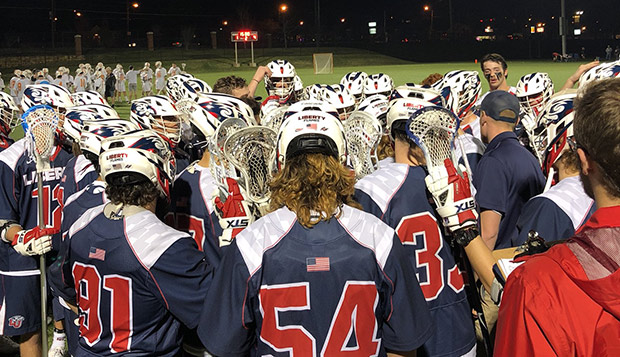