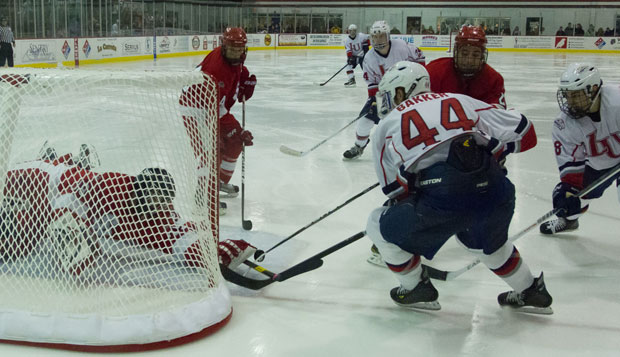 Continuing its offensive success against Stony Brook on Nov. 18, the Liberty Flames Division I men's hockey team unleashed a firestorm at home Friday night, outshooting the Seawolves 40-24 and staking a 6-1 win.

In the Flames' last matchup with Stony Brook, Liberty put in five unanswered goals at one point. As if attempting to one up themselves, the Flames went on a 6-0 scoring run in the last two periods.

Liberty came out with guns blazing in the opening period, outshooting Stony Brook 15-5. The Flames were unable to capitalize on several opportunities around the net, however, and it would be Stony Brook who would light up the scoreboard first — on its first shot no less. Liberty gave up the goal at 8:16 on a Seawolves power play.

The score notwithstanding, Liberty seemed to carry the game's momentum with its aggressive offensive play, which paid off in the second period. The Flames tied it up five minutes into the second when Steven Bellew made good on a feed from Rick Turner. Kyle Garcia was tallied the second assist on the play. Three minutes later, Turner was stopped on a breakaway but Garcia chipped in the blocked shot giving Turner another assist.

Later in the period the Flames showed some defensive grit, holding off a two-minute Seawolves five-on-three. Blair Bennett made some incredible saves on would-be Stony Brook goals to keep the Flames ahead 2-1.

With under five to go in the second Turner shot one in off the glove side crossbar to give Liberty a two-goal cushion. Liberty kept the heat on and scored again with 32.6 on the clock as Ryan Kerr fired one home off an assist by Garcia.

Though Stony Brook picked up its offensive intensity in the second period, Liberty managed to outshoot the Seawolves once again 13-12.

Two minutes into the third period Ryley Egan took a Paul Ingles feed and scored the Flames' fifth unanswered goal. Andrew McCombe closed out the scoring after making good on a perfect set-up from Turner.

Bennett went the distance, blocking 24 shots and taking the win.

Stony Brook and Liberty will face off once more Saturday night beginning at 7 p.m. in the LaHaye Ice Center.