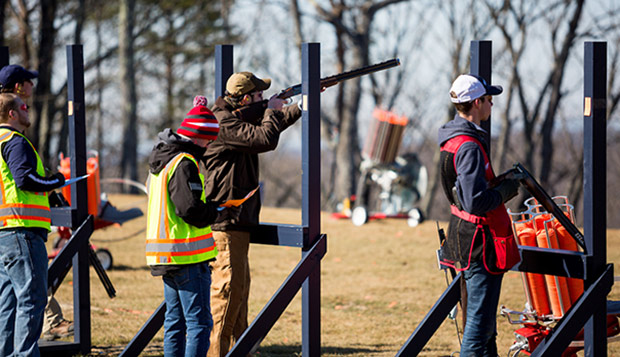 Competitors from Liberty's and JMU's shooting teams fire out of the Five Stand last Saturday. (Photo by Nathan Spencer)

Ten members of Liberty University's men's and women's shooting teams fired against 10 contestants from James Madison University in the first collegiate shotgun competition at the Liberty Mountain Gun Club (LMGC) this past Saturday.

"Their team and our team are coming together as not rivals but friends, and building a long-lasting friendship between the two teams," Liberty Head Coach and LMGC Director Dave Hartman said. "This sport is all about friendships and not rivalries. We learn from each other and we build each other up."

The Flames and Lady Flamed defeated the Dukes by a combined score of 1,318-1,121, led by sophomore Tommy Hartman, who shot a perfect score of 25 on the American Skeet and fired an 18 (out of 20) on the Bunker to edge sophomore teammate Landon Dalton (17), who won a shoot-off for second place.

"It's just fun to shoot with (JMU)," Tommy Hartman said. "It's really good camaraderie because it doesn't feel like you're competing against somebody, but against yourself, with other people you've never met before."

James Bushnell won a shoot-off with fellow Flames freshman Jonathan Britton for second place in the American Skeet competition after both shot rounds of 24. Britton also placed third in the Five Stand with a 39 total. Liberty junior Richard Allen tied for first in that event with a score of 40 before losing a shoot-off against JMU's Will Leary, who also won a tie-breaker against Bushnell after both fired rounds of 16 in Super Sporting Clays, with Hartman (14) finishing third. Allen took first place outright in the International Skeet competition with a score of 20. Bushnell beat Hartman in a shoot-off for second place in that event after both fired 16s.

In the Trap discipline, Liberty sophomore Casey Williams tied the Dukes' Kevin Frautschi for first with 22 targets hit, but lost a shoot-off. He edged Hartman (21) for second place.

Lady Flames freshman Chloe Sterner won a shoot-off for second place in the Wobble station after firing a round of 22 out of 25.

"Within shotgun, skeet is my specialty and my favorite," she said. "I'm really excited for it. We are so blessed. No other schools have the opportunity to train on these type of facilities."

The LMGC is the first shooting range approved by the National Rifle Association on a college campus in the United States and the first NCAA-certified collegiate outdoor range that will be able to accommodate all of the Olympic shooting sports disciplines.

"It's awesome, it's fantastic," Tommy Hartman said. "You get a whole view of everything."

The range will be open to the public (pay-per-use) and local law enforcement (no charge) starting this spring, when the rifle and pistol ranges are completed, but will be utilized primarily by Liberty's students.

"That's one of the reasons we built this, for other people to come and for the sport to flourish," Dave Hartman said.

A former U.S. Shooting Team member, Carol Smeltzer from Norfolk, Va., who specialized in the International Trap, helped train Liberty's shooters last month and is willing to serve as an assistant coach on a voluntary basis. 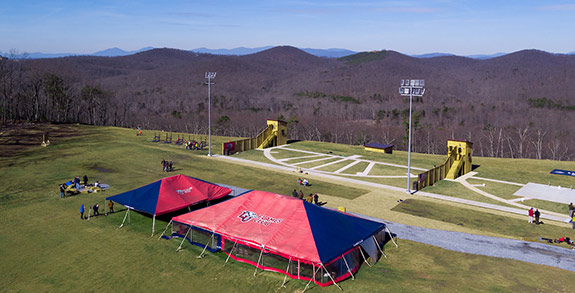 An overhead view of the Liberty Mountain Gun Club's main shutgun range, with the tent on the spot where a new lodge will be constructed this spring and summer. (Photo by Nathan Spencer)