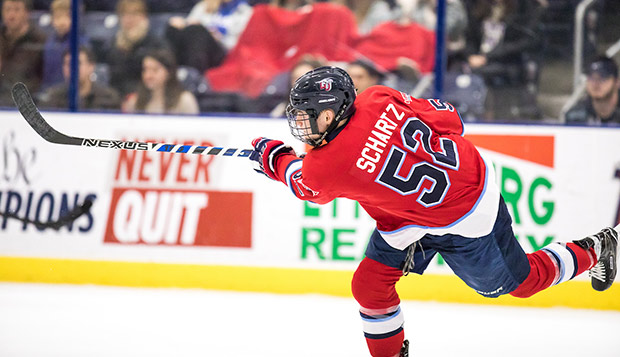 Liberty University's ACHA Division I men's hockey team opened a six-game regular-season-ending homestand against non-ESCHL competition with a 4-3 victory over Western Michigan, Friday night at the LaHaye Ice Center. The Flames (23-6) extended their winning streak to a dozen games, their longest run of success since opening the 2009-10 season at 16-0.

After netting four power play goals in both games of a sweep at defending ESCHL regular-season champion Delaware last weekend to clinch its first regular-season crown, Liberty scored three more against the Stallions (11-16-2) to escape with a one-goal win in the teams' first meeting.

"Those guys played well, I didn't think that we had our best night," Flames Head Coach Kirk Handy said. "We relied on our special teams too much and our special teams have been doing great — we had a five-on-three penalty kill and we scored three power-play goals — but five-on-five we have to be a whole lot better (Saturday) night."

Liberty outshot its guests, 34-25, and both teams were assessed nine penalties in the physical matchup.

"Obviously, we're happy we won tonight, but we as a team want to play better," Flames senior forward and alternate captain Grant Garvin said. "We're not fully satisfied with that win. We need to keep getting better every game, not really worrying about other teams, just focusing on ourselves."

Liberty broke the scoring ice with its first power-play goal with 13:19 remaining in the first period when Garvin — the leading scorer in ACHA DI with 20 goals and 41 assists — worked the puck out from behind the cage to junior forward Zechariah Roberts, who dished it off to junior alternate captain Zane Schartz — The top-scoring defenseman in ACHA DI, tied for second overall with 53 points (19G, 34A). Schartz rifled a shot from the high slot into the upper netting for a 1-0 edge.

Less than two minutes into the second stanza, with Liberty a man up, Schartz sparked Liberty's transition game by skating the puck out of the defensive zone with speed. Garvin sent Schartz, a cross-crease return pass deep in the right circle where he found sophomore linemate Brock Thompson for a tip-in near the left post, doubling the Flames' lead to 2-0.

After Western Michigan had two shots clang off the crossbar, the Stallions knotted the score with two goals in the span of 96 seconds midway through the period. With 9:23 left, forward Christian Sana gathered the rebound of his own shot blocked by Flames junior goalie Cole Burack — around the sliding block attempt by senior defenseman Colt Steele — and lifted a wrist shot into the top right corner of the net. Then, with Western Michigan on a power play, Josh Kirsch sent a short pass to fellow forward Brandon Grillo at the top of the right circle where he fired a shot into the top left corner.

Liberty killed off a Stallions power play before going back on the man advantage and sophomore defenseman Garrett Nelson netted the game-winner with 2:11 to go in the second period. He launched a shot from the top of the left circle through traffic past Western Michigan goalie Sam Woznicki, off assists from freshman forwards Jordan Bochinski and Devin Pierce.

Just over a minute later, the Flames struck again on another spectacular feed from Schartz, this time a laser crossing pass from the left wing onto the tape of freshman forward Ryan Cox as he skated toward the cage for a point-blank putaway, and Liberty took a 4-2 advantage into the second intermission.

Both teams had goals called back in the third period, which remained scoreless until the final five seconds when Grillo pocketed a putback from deep in the right crease. Moments after Burack smothered a wraparound opportunity by Kirsch under his pads, Nelson appeared to finish off a feed from behind the net before crashing into the cage, knocking it off its moorings.

"That's part of the game and we just need to keep battling," Handy said. "We have to be more consistent and come ready to compete for 60 minutes, regardless of what's going on around us. At this point, we just have to challenge our team to be better. That's our focus for the next five games."

The Flames and Stallions will meet again Saturday at the LaHaye Ice Center with the puck-drop again set for 7 p.m. and the game webcast live by LFSN on the Big South Network and WatchESPN. 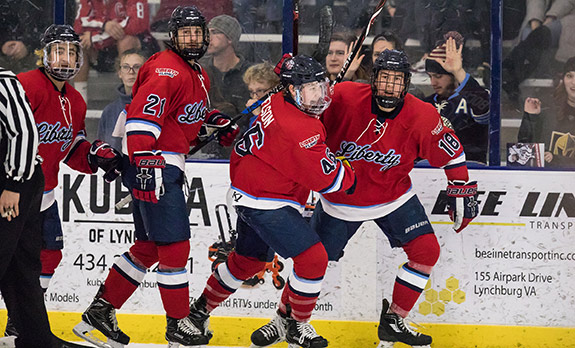