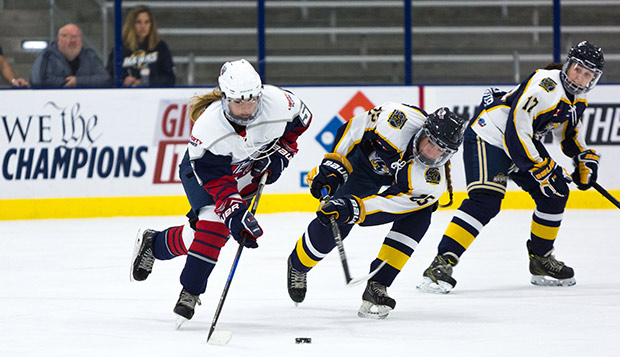 Freshman forward Shelby Bradford skates the puck up the LaHaye Ice Center ice in a game earlier this season. (Photo by Nathan Spencer)

Senior forward C.J. Tipping scored the golden goal with 18 minutes, 39 seconds remaining in regulation to lift Liberty University's top-ranked ACHA Division I women's hockey team to a 1-0 triumph in its series opener at No. 8 Massachusetts, Friday night on the Olympic-sized ice at the Mullins Center in Hadley, Mass.

It was Tipping's ninth goal of the year and her second game-winner. Liberty has now won 21 of its past 22 games, with its lone loss in its 2018 opener on Jan. 13 against No. 3 Michigan State.

The Lady Flames (21-3, 19-1 ACHA) outshot the Minutewomen (12-8-1) by a 28-19 margin and sophomore goalie Nadia Rupoli (9-1) made 19 saves to preserve her team-high fifth shutout of the season. She ranks first among ACHA DI net minders with a goals-against average that dipped below 1.00 with the win, raising her save percentage to right around 95.0.

The two teams will face off again in the same rink on Saturday at 11:50 a.m.