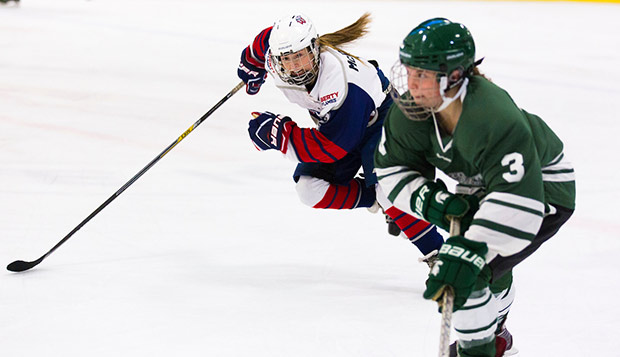 Liberty University's top-ranked ACHA Division I women's hockey team's record-setting 19-game winning streak came to an abrupt end in the Lady Flames' first game of the new year, a 5-3 setback to No. 3 Michigan State on Saturday night at the LaHaye Ice Center.

"We knew coming into the game we were going to have to face a tough team," Liberty senior forward Courtney Gilmour said. "Obviously, Michigan State just came in a little bit more prepared than we did today. We're not really used to having that much pressure and the puck was bouncing off our sticks and we didn't know how to really calm down. So I think it was a wake-up call for us but it's going to be beneficial in the long run."

Maddie Wolsmann, a returning All-ACHA Division I first-team forward, started the scoring for Michigan State (10-2-1) just 23 seconds after the opening faceoff, slipping the rebound of shot off the post by defenseman Sherine Diffendal under the pads of Lady Flames sophomore goalie Nadia Rupoli.

Liberty (19-3, 17-1 ACHA) answered with the equalizer 50 seconds later when sophomore defenseman Rachel Gibson sent a quick pass from along the back boards to sophomore forward Tiana Lisle for a point-blank putaway in front past Spartans goalie Hannah Johnson.

However, the Spartans capitalized on a power-play opportunity three minutes later when center Katie Krumm finished with a shot from deep in the right circle for a 2-1 advantage.

Michigan State struck even more quickly to start the second period, extending its lead to 3-1 at the 19:49 mark. Wolsmann received the puck off the faceoff at center ice and took an initial shot blocked by Rupoli right to forward Kelsey Jaeckle. Her putback in the right crease forced Rupoli out of position and Wolsmann tucked the puck off her stick and inside the left post as she slid down beside the goal.

The Lady Flames pulled back within 3-2 with 13:05 to play in the third period when freshman forward Shannon Fehr sent a backhanded pass from the backboards in to junior forward Lauren McDonald, who controlled the puck before lunging at it while falling down and sliding it through the five-hole.

After nearly 10 minutes of back-and-forth action, Liberty All-ACHA DI defenseman C.J. Tipping delivered the tying goal on a shot from the high slot through a double screen, knotting the contest at 3-3 with 3:30 remaining in regulation.

But the Spartans responded in a timely fashion, needing less than a minute to reclaim the lead on a three-on-one break. Wolsmann completed her hat trick by lifting the puck past Rupoli into the top right corner of the cage after skating into the right crease.

The Lady Flames pulled Rupoli for the final minute and a half and Wolsmann capped the scoring for the Spartans with her fourth goal of the game and 16th of the season, an empty-netter from three-quarters of the length of the ice away.

"They did a really good job of answering back and that's what we lacked today," Gilmour said. "Those games are really hard to play, especially once you get the momentum and you work so hard to get it back up. That was rough skating our first game back, but that's what happens. Hopefully we can come out (Sunday) a lot stronger than we did today."

Liberty has little time to regroup with Sunday's rematch set for 9 a.m. at the LaHaye Ice Center.

"We just need to split the series and get it back," Lisle said. "I don't feel that we executed everything perfectly today so I feel like we can do a lot better tomorrow, now that we have a game under our feet. The girls just need to get their head up, make the hard passes, work on the little things that we've been practicing all week. We've just got to keep our feet moving and get the puck to the net because (Johnson is) a good goalie so we've got to keep it down low and get hard shots. If the girls move their feet, we're going to be able to respond that much faster." 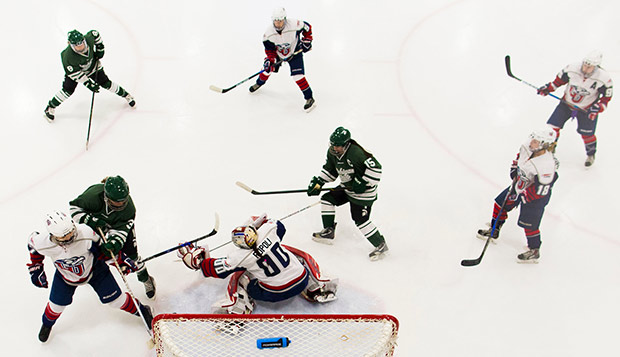 Liberty sophomore goalie Nadia Rupoli comes out of the cage to try to make a save against MSU.