Lady Flames' Kline to share love of Ultimate in Thailand 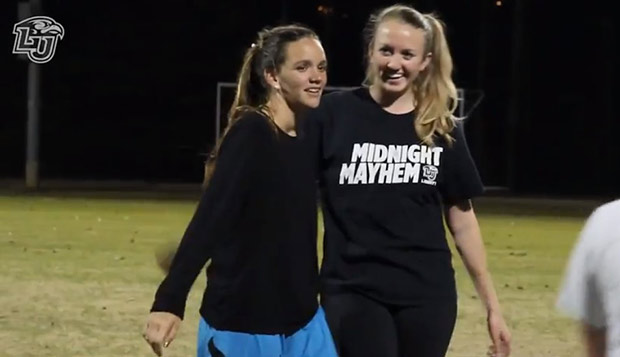 "I'm always up for telling people about Jesus and playing Ultimate," said Kline, who flew out of JFK International Airport in New York on Tuesday, beginning a three-day journey to Thailand. She will spend nearly a month in the country conducting Ultimate Frisbee workshops for hundreds of elementary and middle school students.

After graduating from high school in Philadelphia, Kline spent three years as a missionary in South America — one in Argentina and two in Uruguay as part of Avant Ministries' house church planting team — before returning to the United States and enrolling at Liberty.

She led similar Ultimate workshops at schools in South America, where she learned the sport before joining Liberty's women's team, coached by Jonathan Mast.

"Jonathan was my first actual coach and he has been absolutely wonderful," Kline said. "It's been really cool to be connected with a group of girls that's not just focused on winning a game, but bettering themselves and Jonathan is a huge catalyst for that."

Kline now serves as co-captain for the Lady Flames along with Anna Marie Stow, a sophomore handler from Chile who Kline unknowingly played against while competing in a tournament with her Uruguayan team.

"In South America, they wouldn't know what Ultimate Frisbees were so it was really fun to see them grasp a new idea of the sport," Kline said. "It's about camaraderie and caring for the other person and letting that flow over to life. From what I've seen in South America, that has a huge impact on the people playing and the people coming into the sport who have never heard of it before."

In Thailand, Kline will join missionaries from Australia who planted a church in a mountainous region eight hours north of Bangkok and have served there for more than 10 years.

"They have never really played Ultimate before but they were excited when I told them about the opportunities I had in South America and they are open and ready and see the value and the impact that it could have," Kline said.

She will also join the full-time missionaries in weekly Bible studies and jail ministries as well as going into schools to teach English.

"We'll have what they call the ‘Western Holiday Exposure,' which is where we'll get to talk about Christmas and Jesus all week in public schools, which is huge considering they're mostly Buddhist," Kline said. "I'm hopeful because I know that God is going to do amazing things and I'm grateful just to be (used) in all of this."

"I am hopeful, expectant, and excited to see what God is going to do in my heart as far as missions is concerned," she said. "I'm a huge advocate for mission trips. It's so vastly important for people to experience other cultures and to go on at least one mission trip in their life."

Kline will walk with her Class of 2018 in May before finishing her B.S. degree in developmental psychology with a youth ministries internship in Nashville, Tenn. She plans to pursue a master's degree in social work after graduation.

Before leaving Lynchburg, Kline received donations of 20 discs and 25 cones from the Club Sports department to take with her for the workshops. Through friends on social media, she has established contact with a company in Bangkok that supplies Ultimate equipment. She hopes she can recruit assistants to travel with her to help run the clinics and serve as her translators.

"The Frisbee and Ultimate community is very diverse and very wide," Kline said, noting that the sport was invented in the United States and has spread throughout the world with universal rules of play. "I might even be able to minister to those people that have known about Ultimate but maybe don't know about Christ."