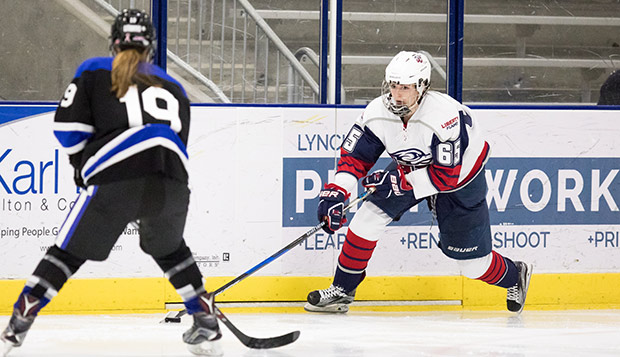 Liberty University's ACHA Division I women's hockey team opened its final series of the semester with its second shutout in its past three games, and second in a row against Rhode Island, Friday night at the Bradford Boss Arena on the Kingston, R.I., campus.

Sophomore forward Vanessa DeMerchant ended the shutout midway through the second period by tipping in a shot by freshman defenseman Sydney Pierce from the point. Two minutes later, sophomore defenseman Holly Turner extended Liberty's lead to 2-0 by capitalizing after a scrum in front of the net resulted in a Rhode Island penalty.

"We were happy to get those first two in the second period to open things up because even though we were outshooting them (31-13 through two periods), our chances didn't seem that dangerous," Lady Flames Head Coach Chris Lowes said.

At the 13:41 mark of the third period, sophomore forward Deena Birney gave the Lady Flames a 3-0 cushion by finishing an assist from freshman forward Shelby Bradford before sophomore defenseman Rachel Gibson capped the scoring exactly four minutes later on the most spectacular goal of the night.

"It was a long odd-man rush started by (Tiana) Lyle who made the pass to (fellow sophomore forward) Aly (Morris)," Lowes said. "She skated all way along the boards and found Gibson all alone in front, where she made a highlight reel move and beat the goaltender backhanded."

Sophomore goalie Nadia Rupoli moved into a tie with junior Kelly Hutton with her third shutout of the season, lowering her goals-against average closer to Hutton's 1.00 mark that ranks first in ACHA Division I among goalies with four or more decisions. She held the Lady Rams scoreless even while they were on a five-on-three power play for much of the final five minutes of regulation.

"Nadia did a decent job after we made a few uncharacteristic mistakes and gave up a couple odd-man rushes and a breakaway," Lowes said. "Overall, it wasn't our best effort, but we did enough. Rhode Island was a solid team and we will have a good chance to rebound."

The two teams will meet again and close out the Fall semester schedule Saturday at 4 p.m. at Boss Arena.