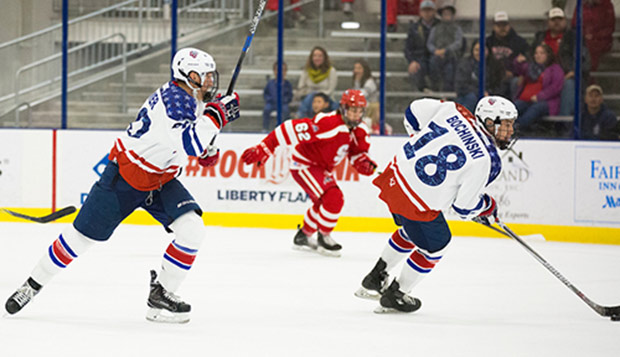 A night after Liberty University's ACHA Division I men's hockey team dealt Stony Brook its first regulation defeat of the season, the Seawolves struck back against their Eastern States Collegiate Hockey League rivals by sending the 14th-ranked Flames (9-5, 8-1 ESCHL) to their third loss in four games with a 5-3 setback, Saturday night at the LaHaye Ice Center.

"We knew there was going to be a pushback and we knew we'd have to weather their storm," Flames freshman forward Cole Gammer said. "It was just a hard-fought game and the puck just wasn't bouncing our way tonight."

No. 9-ranked Stony Brook (10-1-1, 6-1 ESCHL) got timely goals throughout the contest, starting with 8:38 to go in the first period. Defenseman Francesco Sherding's shot from the top of the left circle bounced off the pads of Liberty junior goalie Cole Burack, and forward Kevin Murphy was right there to slam the rebound from deep in the right crease into an open net two seconds before the Seawolves' first power play expired.

Stony Brook starting goalie Richard Shipman was ejected for starting a fight with Flames freshman forward Sam Carlson, who had collided with him after skating into a defenseman on a fast break late in the period. That put Liberty on a power play for five minutes, and forced the Seawolves to put first-game starter Payne Yoder back between the pipes.

The Flames tied it up at the 17:33 mark of the second period on sophomore defenseman Garrett Nelson's shot from the high slot. However, seconds after the rest of the five-minute violation expired, Stony Brook reclaimed the lead when forward Devin Linker, who was serving the penalty for Shipman, came out of the box just in time to pick up a loose puck near mid-ice. He took it the rest of the way in and beat Burack with a low shot on the breakaway, giving the Seawolves a 2-1 advantage and shifting the momentum back in their favor with 16:17 remaining in the period.

"Momentum's huge in this sport and they answered really quick there," Gammer said. "For us moving forward, we have to learn to keep our foot on the gas there once we get those big goals to put us back in the game, to use that momentum shift after shift. We can't let up after a goal like that."

Midway through the stanza, Stony Brook capitalized on a Liberty miscue when two players collided at mid-ice and Seawolves forward Keith O'Brien corralled the turnover and sent the puck ahead to forward Ian Bernes. He lifted a wrist shot from the top of the right circle into the top-left corner of the net, extending the lead to 3-1.

With the Flames on a power play, Nelson lost his footing backpedaling in his own end and got tangled up with a Seawolves player as he slid into the back boards. After being treated by Liberty athletic trainers for nearly 15 minutes, he was taken off the ice by stretcher with a leg injury.

Liberty responded after the lapse to draw back within 3-2 with 3:53 left in the period when Flames junior defenseman Zane Schartz chipped the puck backwards from along the right boards to senior forward Grant Garvin. He tapped it to sophomore forward Brock Thompson who skated in and sneaked a shot between the pads of Yoder from deep in the right crease.

But once again, the Seawolves answered, this time seconds after going on a power play when Brendan Calello deflected a shot from the high slot off the stick of defenseman Brendan Pepe and the puck dribbled across the goal line under the pads of Burack. It was Calello's sixth goal against the Flames in as many games dating back to a 5-4 Seawolves win that salvaged a split in their last series at the LaHaye Ice Center on Nov. 5, 2016.

The Flames made it a one-goal game again with 5:23 remaining in regulation when Gammer took the puck from Schartz along the back boards and threaded a pass between two defensemen to senior forward Grant Garvin, who one-timed a slapshot from the inside edge of the right circle into the top right corner of the cage, trimming the deficit to 4-3.

Burack made back-to-back point-blank saves on the other end with 2:30 to go before the Flames pulled him for the final 1:13 of play to set up the man advantage. Seawolves forward Matthew Crockett ended the threat by intercepting the puck near the red line and fired it into the back of the empty net.

Stony Brook outshot Liberty 29-26 for the contest with both teams being penalized four times and the Seawolves converting on two power-play opportunities.

The Flames return to LaHaye next Friday and Saturday at 7 p.m. against defending ESCHL regular-season champion Delaware, needing two wins to salvage a split of their six-game homestand.

"We know our schedule's going to be hard here, but we're excited moving forward," Gammer said. "We love playing in these games and it's going to be an awesome test for us. We know we're going to get these types of teams in playoffs and nationals, etc., so I'm really excited to see how we respond." 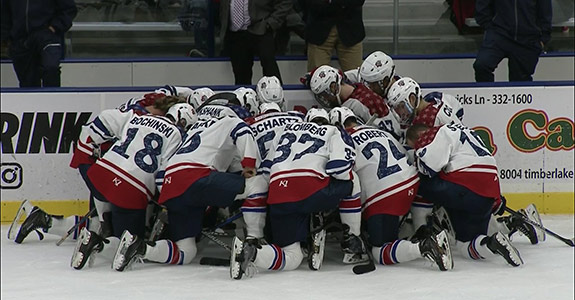