Lady Flames push winning streak to 12, including 10 on road 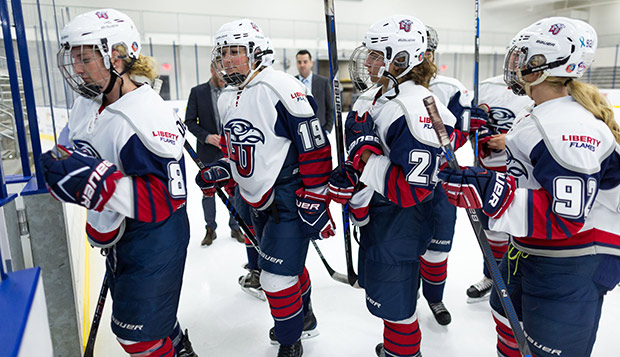 The Lady Flames, who have been road warriors this season, skate off the LaHaye Ice Center ice after their home opening scrimmage on Sept. 1. (Photo by Nathan Spencer)

Liberty University's ACHA Division I women's hockey team has skated through its league schedule, winning 12 games in a row, including 10 against ACHA opponents and 10 on the road.

The Lady Flames (12-2, 10-0), ranked first in ACHA Division I since the preseason, posted their sixth shutout of that stretch Saturday afternoon in the second game of the UMass Showcase, blanking the sixth-ranked host Minutewomen, 3-0, at the Mullins Center.

"They've been excellent on the road this year," said Liberty Video Coach Josh Graham, who served in the same capacity for the team from 2008-12 before returning this Fall to pursue a degree through the School of Divinity. "We've dealt with some injuries, come back quite quickly from them, and built some good road endurance."

The Lady Flames extended their streak of shutout hockey to 161 minutes, dating back to their 10-1 triumph at Colorado State last Friday.

Sophomore goalie Nadia Rupoli stopped a dozen shots by UMass (5-3) to record her second shutout of the season. The Minutewomen's only two previous losses came at No. 2 Adrian on Oct. 7-8.

"The girls did a good job of shutting them down," Graham said. "Most of their shots came from the outside so Nadia had a pretty quiet night tonight."

Liberty wasn't as efficient as usual on special teams, going 0-for-5 on the power play.

"That was a little bit of a struggle tonight playing on the Olympic sized ice and adjusting to the extra 15 feet of space," Graham said.

But the Lady Flames capitalized on enough of their chances at even strength, starting with 3:53 remaining in the first period on a goal by senior forward Chelsey Greenwood assisted by junior forward Lauren McDonald and freshman forward Shelby Bradford.

Then, with 11:28 remaining in the second period, McDonald netted a beautiful goal off assists from senior defenseman C.J. Tipping and senior forward Courtney Gilmour, doubling Liberty's lead to 2-0.

Finally, less than a minute into the third period, sophomore forward Deena Birney made it 3-0 by finishing feeds from freshman forward Shannon Fehr and Gilmour.

"Most of our goals came off rebounds, with players being in really good position for follow-ups," Graham said, noting that they elicited cheers from a Lady Flames-heavy crowd.

"The last two road trips, a lot of parents have been coming to our games, so it's kind of like playing a home game," he added. "We've had 25-30 people coming to our games in Colorado and now Massachusetts, so it's been really encouraging to have all of the support from the families."

Liberty will be thankful to have an extra hour of sleep due to Daylight Savings Time going into effect before it faces off against Penn State in its third and final game of the Showcase, Sunday at 7 a.m.

The Lady Flames swept the Ice Lions by 13-0 and 10-0 scores in their only two ACHA home games so far this season, and will look to extend their winning and shutout streaks.

Liberty won't play at the LaHaye Ice Center until a Dec. 1-2 series against Grand Valley State, two weeks after traveling to Michigan to face the No. 10 Wolverines on Nov. 16 and No. 2 Adrian on Nov. 17.