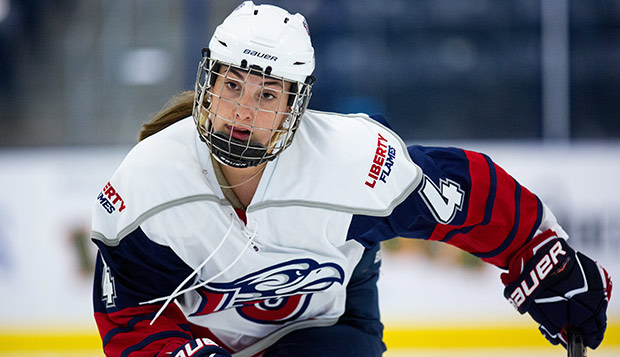 Liberty University's ACHA Division I women's hockey team, ranked No. 1 in the nation for the fourth consecutive poll, overcame any sluggishness that could have set in from an overnight bus trip to Massachusetts and soundly defeated No. 11 Rhode Island 7-0 in Friday night's first game of the UMass Showcase.

"From the opening puck drop, we took control of the game and played a pretty solid game all the way through," Lady Flames Head Coach Chris Lowes said, noting that the game was played on Olympic-sized ice at the Mullins Center. "We've got deep lineup and a lot of speed, too."

"That was a crippling goal to get before the end of the period to put us up by three," Lowes said after Liberty won its 11th game in a row and dealt Rhode Island (2-1) its first defeat. "We rode our defense the rest of the way. We took three penalties in the first period, but played well in five-on-five. (At the intermission) I asked the girls to respond and they only took one more minor penalty the next three periods."

Freshman forward Shelby Bradford netted the first of her two goals on the night, assisted by senior defenseman C.J. Tipping and John with 12:35 left in the second period before Hutton made a great save in the final 1:30 of the stanza to preserve the 4-0 lead.

Liberty outshot Rhode Island by a 56-9 margin for the contest and the final outcome could have been even more decisive, but the Lady Flames hit a few posts on quality scoring chances. Junior goalie Kelly Hutton made a couple big saves to secure the shutout.

"Rhode Island put a couple dangerous pucks on the net on the power play, but they were nothing she couldn't handle," Lowes said.

He expects a much better challenge in Saturday's 1:30 p.m. second game against the sixth-ranked host Minutewomen.

"UMass won today in overtime over (No. 10) Michigan, so it will be a good test and a pretty important game for us," Lowes said.

He said the Minutewomen will observe a moment of silence before the contest in memory of former Lady Flames standout forward Sarah Stevenson, who died suddenly early Tuesday morning.

"The girls are doing some things internally," Lowes said, noting that Gilmour, Greenwood, and Tipping, who were teammates of Stevenson's during the 2014-15 ACHA DI national championship season, plan to travel to Aurora, Ontario for her memorial service next Friday afternoon. "For the three players who played with Sarah, it is going to be on their minds and pretty fresh for a while."