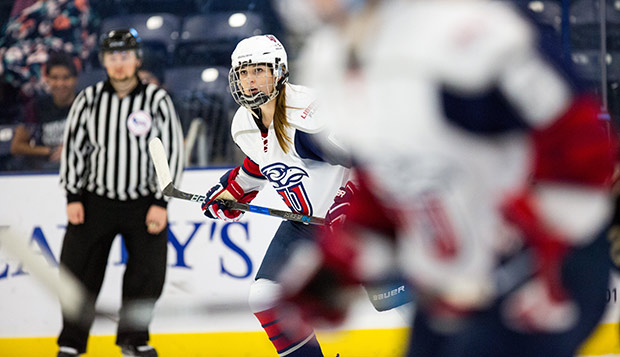 Liberty (8-2), ranked first in this week's ACHA DI poll, won for the eighth time in a row after opening its season with two non-league losses to the Washington Pride. Colorado (6-1) suffered its first setback after moving up to No. 8 in this week's rankings.

"We're a really deep team, with four lines that can go out there and get the job done," Lady Flames Assistant Coach Justin Forth said. "We are one of the deepest teams in the league, which is why we have had so much success, especially coming to a place like Colorado where the air is a little thinner. We were able to rotate our four lines in and keep everyone fresh."

The Lady Flames rallied from an early 2-0 deficit after allowing the Buffaloes, who have outscored opponents 50-15, to net two goals in a span of nine seconds six minutes after the opening faceoff. Leah MacArthur scored unassisted before Kathleen Ash finished feeds from Rachel Maselli and Maura Keift

"They caught us off guard and put us back on our heels a little bit, but the girls did a really good job of fighting through that early adversity," Forth said, noting Ash, Keift, and MacArthur are the top three scorers in the league. "This was a very dangerous offensive team."

Liberty sandwiched two shorthanded scores around a power-play goal to seize a 3-2 lead by the end of the first stanza.

"We took advantage of our opportunities," Forth said. "We moved the puck well and were able to bury them at key times."

Freshman forward Shannon Fehr recorded the first shorthanded goal unassisted to cut Colorado's lead in half before the Buffaloes were called for roughing and senior forward Courtney Gilmour netted the equalizer with 1:56 left in the period off assists from sophomore forwards Deena Birney and Tiana Lisle.

After Liberty senior defenseman Chelsey Greenwood was whistled for roughing, junior forward Lauren McDonald, who ranks fourth in the ACHA in scoring, gave the Lady Flames a 3-2 lead that they would not relinquish by netting another unassisted shorthanded goal in the final 30 seconds of the period.

Senior forward C.J. Tipping added a power-play goal set up by Birney and freshman forward Shelby Bradford for a 4-2 advantage early in the second period. Sophomore forward Aly Morris added an unassisted score to pad the lead to 5-2 before Ash finally answered for the Buffaloes near the midpoint of the contest.

Liberty responded a minute and a half later when Mackenzie Carroll converted assists from fellow sophomore forward Alex Smibert and sophomore defenseman Rachel Gibson, extending the Lady Flames' lead to 6-2.

MacArthur added her second goal at the 12:30 mark of the third period before Birney capped the scoring on the power play off passes from Bradford and Gilmour.

For the game, Liberty racked up three goals on the power play while shutting Colorado out with six penalty kills and outshooting the Buffaloes 29-26. Junior goalie Kelly Hutton made 22 saves for the Lady Flames, equaling Natalie Warnes' total for the Buffaloes.

Thursday's rematch is set for 7:30 p.m. (EST) and can been seen live on the Buffs' Facebook page.