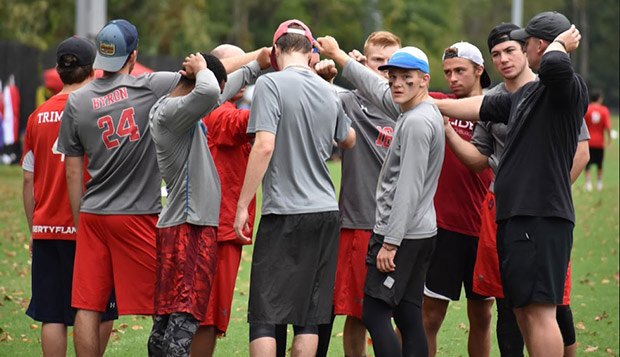 Liberty players huddle up after a match at the season-opening Brickyard Brawl hosted by NC State. (Submitted photos)

It was a weekend of competitive clashes for Liberty University's men's Ultimate team at the season-opening Brickyard Brawl, hosted by North Carolina State.

The Flames, who were the only Virginia Conference representative in a field with 15 teams from North Carolina and four from South Carolina, placed 12th out of 20 teams in Sunday's playoffs after finishing in a three-way tie for first place at 3-1 in Saturday's pool play. Liberty lost its 11th-place match to Davidson, 11-10, after defeating the Wildcats in pool play, 13-9.

In Sunday's playoffs, the Flames dropped a 13-11 first-round contest to host NC State, the eventual fifth-place finisher. That dropped Liberty to the consolation bracket where the Flames lost to UNCW's A team, 10-5, setting up their rematch with Davidson.

Liberty will host two tournaments on the Liberty Intramural Complex fields to close out its Fall season — the Hill City Hatter on Nov. 11, followed by an LU Alumni game on Nov. 12, and the Blue Ridge Open from Dec. 2-3.