Men's swimming looks to make a splash at ODU Invitational

"This is a landmark weekend for our endurance program as we've got two brand new things going," Head Coach Parker Spencer said. "We haven't ever taken our cycling team to a mountain bike race before, so we're starting a new chapter of cycling and a whole new book on swimming."

"It will be a great opportunity to see where we stack up against everyone else," Spencer said.

The meet starts at noon, so the Flames won't have to leave Lynchburg until at 7 a.m. for the competition that is expected to finish by 5 p.m.

"I'm really excited about it because our swim team has been working very, very hard in practices," Spencer said of workouts in the LaHaye Aquatic Center, which they have been using until the new Liberty Natatorium is completed later this semester. "A lot of these guys are still learning to be teammates with each other and a trip like this helps with the camaraderie of the team."

Liberty is not a member of a conference for its first season but is affiliated with the Collegiate Swim Club Association which operates through USA Masters Swimming.

"We're expecting great things," Spencer said, noting that a few of his swimmers turned down NCAA Division I offers to compete for the Flames. "We have a pretty balanced team and we're entered into every event offered (at ODU). The distance events will be well covered with our triathletes and David Schaffer (a freshman recruit from Liberty Christian Academy) should do very well in our sprint events as will Cameron Foster in the back stroke."

Ethan Raub is one of Liberty's strongest swimmers and Spencer expects Joseph Hall to make a major impact as well, along with sophomore triathlete Thomas Sonnery-Cottet in the distance freestyle and senior Carson Faix, who formerly competed in triathlon and crew, in the breast stroke.

There is no diving competition at ODU, but Liberty may send its two men's divers with the Lady Flames NCAA Division I swimming & diving team to the Virginia Tech duals, Oct. 20 in Christiansburg, Va. 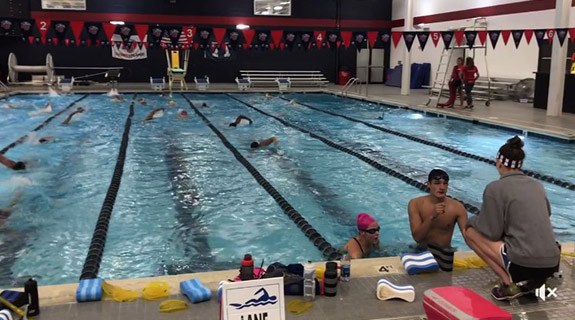