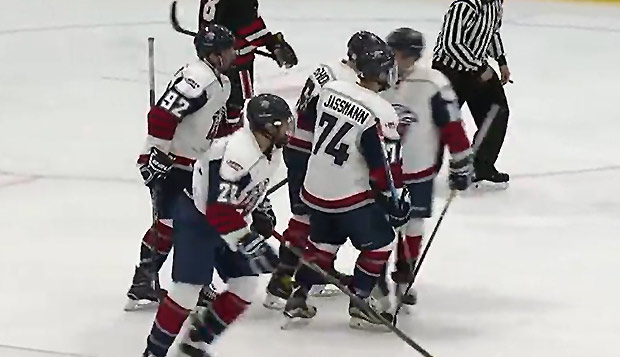 Graduate forward Kade McDaniel gave Liberty a 3-1 lead on the Highlanders with the first of his two goals of the game before freshman Thomas Kazmierczak, younger brother of former DII forward Peter Kazmierczak, answered a Radford score by netting his first goal for the Flames with a shot through traffic from the high slot to make it 4-2.

Freshman Robert Piccerillo pushed Liberty's lead to 5-2 with a leaning shot from in the left circle with 8:34 remaining in the second period before McDaniel added his second on a wrist shot just a minute later. With 2:39 left in the period, Jonathan Klakring one-timed a finish of a beautiful cross-crease pass from fellow senior forward Kyle Jassmann to extend the Flames' advantage to 7-2.

After Radford cut the deficit to 7-4 with back-to-back goals past Liberty senior goalie Derek Guzik, the Flames padded their lead with the game's final two scores in the third period. With 5:20 remaining in regulation, McDaniel launched a shot while falling down at the top of the left circle and fellow forward Scott Chisolm deflected the puck over the head of Highlanders' goalie Alec Yutzler before Matthew Graham capped the scoring by deking past a defender in the right circle and lifting a wrist shot top shelf with 30 seconds to play.

Klakring, Liberty's leading scorer last season (22 goals, 21 assists), picked up where the Flames left off in Saturday's showdown with the Patriots, netting a sharp-angled shot from deep in the left circle just over a minute after the opening faceoff.

George Mason tied it up with a shorthanded score just over a minute later before McDaniel answered by weaving the puck through the left circle and lifting a shot past the blocker of Patriots goalie Nathan George to give Liberty a 2-1 lead. The Flames' extended their advantage to 3-1 with a one-timed finish by Jassmann set up by a spectacular cross-crease assist from McDaniel, who skated from left to right behind the cage.

Liberty allowed the Patriots to tie the contest before seizing a 4-3 lead with 1:30 left in the first period on a fast-break, top-shelf, near-post finish by Piccerelli over George's shoulder from deep in the right circle.

However, George Mason netted five unanswered goals over the final two stanzas to improve to 2-0.