Flames ramp up execution, roll over Alabama in rematch 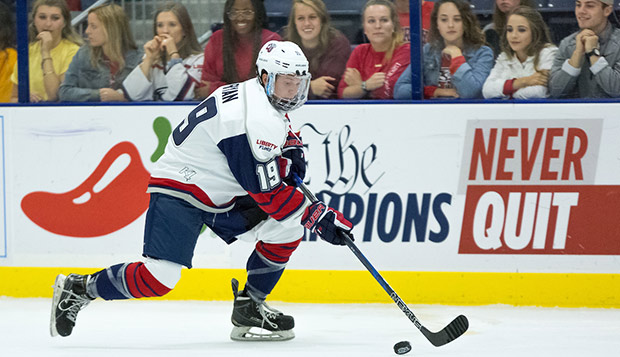 Ignited by scoring from five different forwards, Liberty University's ACHA Division I men's hockey team salvaged a split in its season-opening series against Alabama with a decisive 6-1 triumph, Saturday afternoon at the LaHaye Ice Center.

"We had a better resolve inside the locker room tonight with the guys and that was nice to see," Flames Head Coach Kirk Handy said. "We executed tonight and I think that was the big difference. We won a lot of net-front battles tonight, which was huge."

It was the third series in a row between the two teams that the visiting team won the opener before the home team prevailed in the rematch. The second-year series now stands at 3-3 with the Crimson Tide returning to Lynchburg for two more contests Feb. 9-10.

"We knew we weren't going to let them come in here and take two away from us in our barn," Flames junior forward Owen Harris said. "Everyone was all in and we just went for it and it was a great team win today."

Senior forward Grant Garvin, Liberty's leading scorer for the past two seasons, sparked the offense, netting the Flames' first and final goals of the game. With 1:29 left in the first period, sophomore linemate Brock Thompson stole the puck deep in Alabama's defensive zone and skated through the right crease before bouncing a crossing feed off the pad of Crimson Tide goalie Jesse Gordichuk right to Garvin's stick, where he one-timed an open finish for a 1-0 advantage.

Three minutes into the second period, the Flames capitalized on a restart when sophomore forward Victor Blomberg won a faceoff to junior forward Zak Hayes who worked his way through traffic in the left crease before putting the puck away for a 2-0 Liberty lead.

"(On Friday night), we had a great first period, but let up on the gas pedal in the second and the third," Flames sophomore defenseman Matt Cruickshank said. "Today, we just kept pouring it on all three periods. We were aggressive and we won every battle in the defensive zone, which was huge."

Liberty's penalty kill extinguished three Crimson Tide power plays in the second period with junior transfer Cole Burack making some spectacular saves and enduring some physical contact in his first start between the pipes for the Flames.

Moments after Stephen MacInnis crashed Burack into the cage on an Alabama offensive charge, Liberty junior forward Owen Harris won a faceoff on the other end and tipped in a shot from the top of the left circle by Flames junior defenseman Zane Schartz, off a secondary assist from freshman forward Cole Gammer. That lifted Liberty to a 3-0 advantage with 10:23 left in the second period.

"We have four lines of scoring and it definitely pays off when you're in the defensive zone blocking shots and winning battles and your forwards are getting the job done up front," Cruickshank said. "Everyone was moving their feet and working hard in their end. There was non-stop cycling."

Less than four minutes later, after Alabama defenseman Pierre Ouellette's shot from the top of the left circle clanged off the right post in the closing seconds of a second power play, Liberty converted its first power-play goal of the series. Thompson lifted a backhand putback of Schartz's shot from the right circle into an open net from point-blank range to give the Flames a commanding 4-0 lead.

"Our penalty kill all weekend was strong and it was nice to get a couple on the power play tonight," Handy said. "We were able to get shots through better tonight than we were last night. Our guys also blocked a ton of shots tonight and really played the gritty style of hockey that we need to play. We had a lot of unsung heroes — (freshman forward Sam) Carlson, Hayes, (freshman forward Ryan) Cox, (sophomore forward Josh) Hamilton, (junior forward Zechariah) Roberts, the guys that kill penalties for us did an excellent job."

Sophomore forward Quinn Ryan, Liberty's second-leading scorer last season, netted his first goal of the weekend early in the third period, controlling a rebound of sophomore defenseman Garrett Nelson shot from near the blue line by flicking the loose puck from left to right to himself and lifting a wrist shot from the right post top shelf.

Liberty's top line of Garvin, Ryan, and Thompson combined for four goals and three assists. Besides outshooting Alabama, 42-27, the Flames controlled approximately two-thirds of their faceoffs with senior forward Tim Bierema winning the majority of the draws he took and striking the top left post on a breakaway opportunity in the third period.

Two minutes after another penalty kill, Liberty cashed in on their second power-play goal to seize a 6-0 lead when Nelson, skating in the high slot, spotted Garvin down low for a one-time finish in the left crease with 4:18 remaining in regulation.

The Crimson Tide ended Burack's shutout bid in the final 90 seconds of the third period when Dylan Teed swatted in a follow of Ouellette's shot deflected up top by Blomberg for the final score.

Liberty returns to the LaHaye Ice Center to start ESCHL play next Friday and Saturday nights against West Chester, with the opener being the first "Midnight Mayhem" matchup of the season.