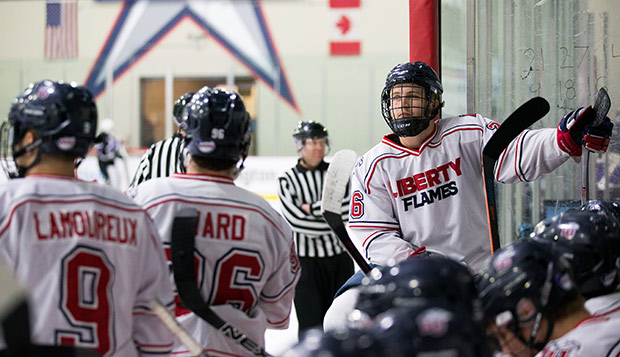 Liberty University ACHA Division II men's hockey features more new faces than any of the other four teams in the program after graduating half of its roster from last year's squad that reached the National Championship game for the second year in a row.

The Flames' new coaching staff of Ben Hughes, Blair Bennett, and Danny Logan, who played for the DII squad last season, finalized this season's 24-man roster late last week. While they lost their top two scorers, Devon Docksteader and Ben Freymond, and had their fourth, Tim Bierema, move up to the DI squad, the Flames return their third- and fifth-leading scorers — senior forwards Robert Ward and Paul Lamoureux. They picked up four forwards from last season's DI squad — sophomores Andy Clarke and Jamie Crane and juniors Drew Crilly and Marshal King. They also added two juniors with DI experience — forward Jeff Wilson and goalie Blake Scott, who started in net for the Flames in the 2016 DII National Championships semifinal win over Miami-Ohio.

"All of our lines are really deep and I'm really excited about that," Hughes said. "Robert Ward and Paul Lamoureux are probably the two most skilled guys in the entire league and Jeff Wilson is another great guy, one of the hardest workers on the team, and he has a lot of character."

Scott will complement junior Jarrett Epp, who went 18-2 with two shutouts last season, and newcomer Adam Partridge, working under the tutelage of Bennett, a former DI and DII standout goalie.

"I'm really excited to have those guys to be anchors for us back there, players we can rely on every game who will help complete our strong defensive corps," Hughes said.

In practices this week, Hughes and his assistants are implementing offensive and defensive systems and finding defensive pairings and forward lineups that function best.

"We're experimenting with our line combinations and continuing to put guys in situational game drills in practice to see how they mesh with one another," he said.

He is excited about the team's skillset and eager to bring out the best in each of his players.

"We honestly have the whole tool box, a whole list of attributes to work with," Hughes said. "The biggest obstacle will be ourselves, internally and making (the most of our potential). We will be reinforcing that they're on the right track and continuing to push them in that direction as coaches, as well as relying on the leadership within the locker room."

The Flames have just over two weeks to prepare for their Sept. 22 season-opening showdown against Mid-Atlantic Collegiate Hockey (MACH) rival Virginia Tech, the first game of the annual "Battle of the Blue Ridge," set for 1:30 p.m. in the LaHaye Ice Center. The rematch is set for Dec. 3 at 2 p.m. in the Roanoke Civic Center.