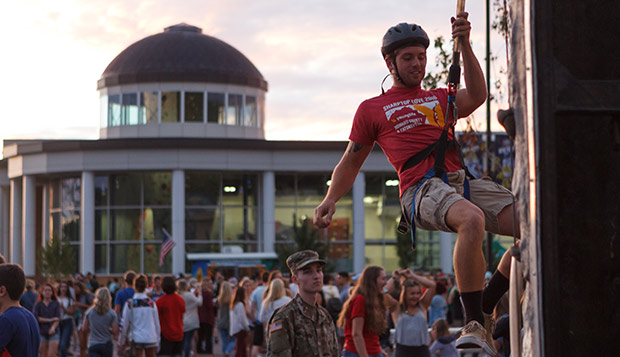 With the LaHaye Recreation and Fitness rock climbing tower in the background, a Liberty student attempts to rappel the tower set up in the LaHaye Ice Center parking lot at last year's Block Party. (Photo by Nathan Spencer)

As incoming and returning students get acclimated to life on Liberty University's campus and adjust to their academic schedules during the first week of classes, several of the Flames' and Lady Flames' 41 Club Sports teams will hold informational meetings and open tryouts through the end of August and into September.

"It's a great way to engage with some of the Club Sports teams and to learn a little more about what each sport offers, to interact with the coaches as well as the players participating in the sports," Liberty Club Sports Recruitment Coordinator Ben Hughes said. "There will be an opportunity to win prizes, including T-shirts and candy, and we'll be handing out schedules for the hockey team."

The men's and women's equestrian teams are holding tryouts at the Liberty Equestrian Center through Thursday starting at 4 p.m. On Wednesday, the men's paintball team will have an informational meeting at 5:30 p.m. in the LaHaye Ice Center before the men's and women's rock climbing ream has its open tryouts on Thursday at the LaHaye Recreation and Fitness Center's rock wall.

Men's and women's racquetball players can try out Monday through Thursday from 5:30-7:30 p.m. over the next two weeks on the four courts located inside the LaHaye Recreation & Fitness Center.

Men's and women's wrestling, which held tryouts on Tuesday in the temporary practice facility on the second floor of the former Macy's building at nearby River Ridge Mall, will hold an informational meeting Friday at 7 p.m. at the LaHaye Ice Center. Men's Ultimate also has an informational meeting scheduled in the Ice Center on Thursday at 7 p.m. before holding tryouts Saturday at 10 a.m. on the Soccer Practice Fields next to the Cook Tennis Complex on Regent's Parkway. The Women's Ultimate team will also use those fields for tryouts on Sept. 12 from 5-7 p.m. and Sept. 14 from 7-9 p.m.

On Labor Day, the men's and women's beach volleyball teams will hold tryouts at 5 and 6 p.m., respectively, on the courts located beyond the Intramural Complex on East Campus. Also on that day, Liberty's men's archery team will hold an informational meeting at 6 p.m. in the Equestrian Center.

Men's and women's disc golf tryouts are set for Sept, 7-8 from 5:30-8 p.m. on the Main Campus Intramural Fields between Commons II and Dorm 28.

Liberty's men's and women's gymnastics teams will offer tryouts on Sept. 9 from 2-4 p.m. in the gymnastics studio located at The Plaza in Lynchburg.

Tryouts for the men's lacrosse team are set for Sept. 12-14 from 3-5:30 p.m. on the Men's Lacrosse Field on East Campus before the new men's and women's shooting sports teams hold tryouts at their new gun range on Liberty Mountain in the third week of September.