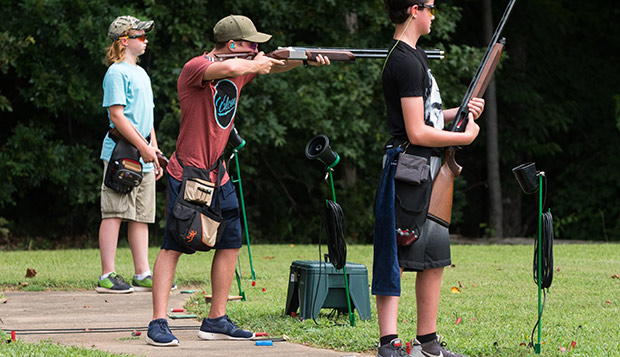 In preparation for Liberty University's inaugural men's and women's shooting sports seasons this fall, Executive Director and Head Coach Dave Hartman will hold an informational meeting for the Club Sports program this Tuesday at 6 p.m. on the second level of the LaHaye Ice Center.

"Youth shooting sports in America are developing rapidly and we already have over 20 incoming freshmen recruits from all over the country who want to be part of the shooting sports program," said Hartman, who welcomed students from Michigan and Minnesota on Thursday as well as a member of the Spokane (Wash.) Area Youth Shooting Team he formerly coached on Wednesday. "We have some talent and experience to work with and that is very encouraging."

Hartman's son, Tommy, a sophomore at Liberty who has competed in international skeet shooting tournaments, will also join the team with aspirations of eventually representing Team USA in the Olympics.

There are numerous disciplines within Olympic and collegiate shooting sports. Hartman will train his teams to compete in three areas — shotgun sports (skeet, trap, bunker, sporting clays, and five stand), rifle and pistol (with 100-, 200-, and 300-yard ranges), and three-gun competition/tactical training.

Anyone interested in joining the program should bring their Liberty Flames Pass as identification and their health insurance card to Tuesday night's meeting.

"We will see what kind of buzz we have going on," Hartman said. "If a student has never shot a gun, he or she can come and see what it is all about. Competitive shooting is truly a sport for the masses. I know of three cases where a student did not know anything about the sport when they got to college and by the time they graduated, they were on a major team or a champion at the collegiate level."

He expects 50 total team members by the time the Flames travel to and host their first shooting competitions in October, when he will have selected the 10-15-shooter competitive travel team, with the rest designated to a developmental team. Everyone on the team will undergo safety training.

In the near future, Hartman plans to offer tours of the Liberty Mountain Gun Club, the Flames' and Lady Flames' shooting range currently under construction across the street from Hydaway Outdoor Recreation Center.

"We have purchased French-made trap and skeet shooting machines used in the Olympics," Hartman said. "For rifle and pistol, we will have 100-, 200-, and 300-yard ranges coming online later this semester."

Collegiate shooting features a fall and spring schedule that dovetails with competition on an international level and coincides with events coordinated by USA Shooting, the U.S. Olympic Team's governing body. Liberty's shooting program will be affiliated with the Association of College Unions International (ACUI), which holds its national championships each spring in San Antonio, Texas.

Current and prospective students inquiring about joining one of the shooting teams can email Hartman at jdhartman1@liberty.edu or clubsports@liberty.edu.