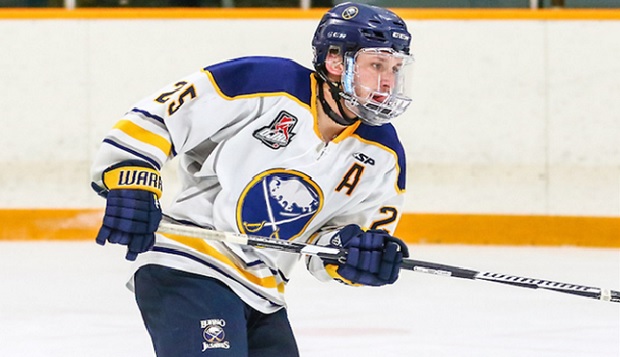 When Ryan Cox visited Liberty University for a spring Hockey Recruitment Camp over College For A Weekend (CFAW) in the spring of 2015, he was grieving the loss of a friend. A timely testimony by a member of the Flames ACHA Division I team reaffirmed his faith and assured him of his friend's salvation. The exchange increased his hunger to play for the Flames and to grow spiritually as a student-athlete at Liberty.

Though he didn't commit for the following fall, opting instead to play for the Buffalo Junior "A" Sabres, Cox remained on the radar of the Flames' coaching staff.

As Liberty's sixth incoming recruit for the 2017-18 season, the seasoned center will follow the path of his older brother, Brandon Cox, who played for the Flames' Division I and II squads from 2013-15 before spending a semester in Lebanon and ending his playing career.

"He's got a hard-working mentality and he's going to be able to come in and battle hard for us," Liberty Head Coach Kirk Handy said. "He's going to play on both ends of the rink, to play a 200-foot game. He's a versatile player and all of those things make him an asset to our program."

Last season, Cox scored eight goals and distributed 12 assists as a forward for the Junior Sabres, the only American team in the Ontario Junior Hockey League (OJHL). The defensive-minded centerman who thrives on penalty kills also led the team with 83 penalty minutes.

"I'm definitely not a finesse player, but more of a basic dump-it-in- and grind-it-out-type player," said Cox, who stands 5-feet, 10-inches tall and weighs 190 pounds. That's about 20 pounds lighter than Brandon, who was a bruising defenseman for the Flames and is currently a graduate student at Liberty. "He's more of a big-weight hitter. We both are hard workers — that's how we got to where we are."

Prior to playing for the Junior Sabres, Cox played three seasons of high school varsity hockey before spending his senior season with the Buffalo Junior Eagles and one season with the Ancaster Avalanche, Junior "B" teams of the Greater Ontario Junior Hockey League (GOJHL).

A native of Buffalo, he also participated in the Fellowship of Christian Athletes (FCA Hockey) camp one summer at nearby Niagara University and competed twice in the Chowder Cup, a high-level tournament in Boston that draws NCAA and ACHA college scouts.

Cox will have plenty on his plate for his freshman year at Liberty, where he plans to major in mechanical engineering and follow the lead of his father, a former member of the U.S. Army Rangers, by serving in Liberty's Army ROTC program.

He said playing hockey has instilled in him the discipline needed to thrive in the military ranks as well as in the rink.

"Hard work says it all," he said. "That's how I play and how I live. Hard work, leadership, playing a two-way game, and being very responsible are my strengths, and hopefully speed will help me out, too."

Cox is spending the summer training for the rigors of hockey workouts and ROTC drills. He expects to make a smooth transition to playing at Liberty and in the ACHA after spending last season in the OJHL.