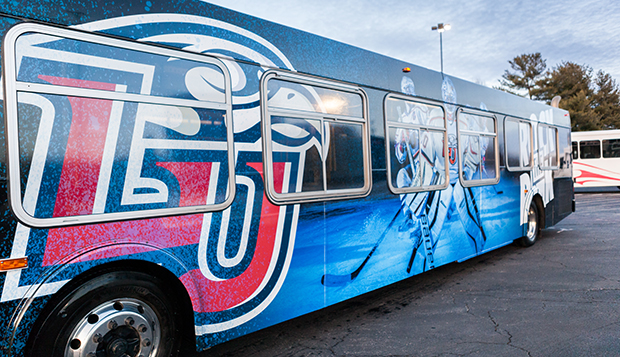 Throughout the course of the 2016-17 academic year at Liberty University, Club Sports teams traveled to compete in more than twice as many contests (355) as they hosted using facilities on campus (166).

Liberty student-athletes and their coaches in any of the 41 Club Sports teams in action on a regular basis rely on timely, safe, and comfortable bus transportation to and from matches or tournaments throughout Virginia as well as up and down the East Coast and even to the Midwest.

"It definitely is an exciting time to be at Liberty," said Club Sports Athletic Director Kirk Handy, who's entering his 17th season as Head Coach of the Flames ACHA Division I men's hockey team. "In the past three years, transportation has changed dramatically because we've had the new charter service here at Liberty. We also have 33-passenger and 15-passenger buses (but) the four or five charter buses on campus have helped us out immensely."

Handy is happy not to have the responsibility of driving the team bus on top of all of his other responsibilities within the program.

"The huge advantage for us is our coaches aren't involved with the transporting of our teams," he said. "We have dedicated drivers who are Liberty employees, and that makes a big difference, the way they treat our student-athletes, the way they interact with them, how flexible they are when things come up and we've got to make changes on a road trip. To have people who are engaged with the mission of Liberty who are now driving the buses is huge."

Kaitlyn Scales, who was a captain on Liberty's ACHA Division II women's hockey team for the past three seasons, said the players don't take the luxury of traveling by charter bus for granted.

"The way that Liberty provides for their athletes is amazing," Scales said. "I know Liberty's Club Sports Department treats us unlike any other club sports department in the nation. We roll up on coach buses and teams' jaws drop when they see the bus because not only are we on a charter bus, but it's decked out in Liberty. It makes traveling that much easier and makes those road games seem not as rough.

"The way that we're treated here, it's incredible," she added. "It's neat to see the way that Liberty takes care of their Club Sports and that they really care about their athletes, whether we're NCAA and whether we're getting scholarships or bringing in money for the university, it doesn't matter."

Handy said the players benefit from having access to the internet on road trips up to eight hours each way.

"Having Wi-Fi on the bus has been gigantic," he said. "A lot more work seems to be done online now with student-athletes and for them to have the ability to do homework on the bus is fantastic."