Spencer finishes fourth in age group at Ironman 70.3 in Spain 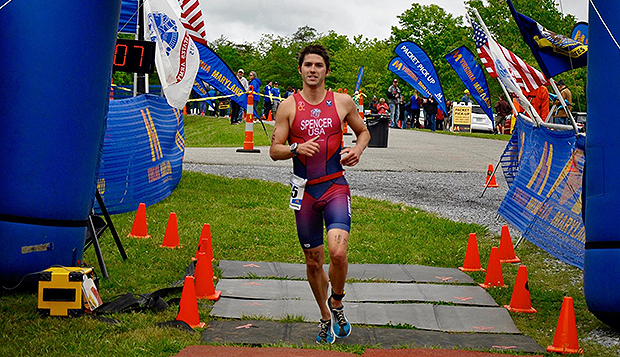 "It was one of the most epic and fun races I have done and by far the most challenging bike course of any race I have done yet," Spencer said.

He finished the swim in 32:18, the bike stage in 2:42:42, and the run in 1:24:13, qualifying for the Ironman 70.3 World Championships set for Sept. 10 in Chattanooga, Tenn. It will be the sixth consecutive summer Spencer will compete in either a triathlon or duathlon world championship, starting with the 2012 ITU World Age Group Triathlon Championships in New Zealand.

He traveled from Spain to France on Monday to stay with the family of Flames rising sophomore triathlete Thomas Sonnery-Cottet, who will be competing in the French National Championships on June 3.

"If he wins, he'll qualify to represent France in the Junior Triathlon World Championships in the Netherlands in September and right now, we're both feeling pretty confident in that," Spencer said. "It will be a tough competition, but his training is going very, very well."

Spencer also plans to compete with rising sophomore Greg Schott at one of his XTERRA off-road triathlons in Beaver Creek, Colo., on July 15, which Schott is entering in preparation for the U23 Off-Road triathlon at the Aug. 18-27 ITU World Championships Festival in Penticton, Canada, and the Oct. 29 XTERRA World Championships in Hawaii.

Spencer and graduating senior Megan Merryman also qualified to compete in the ITU Sprint Duathlon at the World Championships Festival in Canada, but now that Merryman has turned professional in the sport, she will instead focus on launching her career in the Escape Professional Triathlon Series.